The Problem of Language in Korea’s Colonial Period 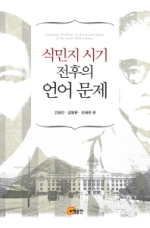 Studying the uses of language in Korea’s colonial period presents a special problem: it is impossible to separate the language consciousness of the era from the contemporaneous concept of nation embedded in educational and social policies. As described in the preface, the book begins with an attempt at “finding ‘kugŏ’ (the national language) in a case-study of Chu Si-gyŏng” and ends with the “abolition of Chinese characters in North Korea shortly after liberation.” This shows the linguistic flow of modern enlightenment: the birth of the concept of national language, kugŏ and its development. The authors—linguists, historians, and literary critics—focus on examining how the concept of nation relates to language and society in modern Korea and Japan.

Because Korean language education was conducted as part of the independence movement during the colonial period, kugŏ is often considered to be the soul or spirit of the nation. Chu Si-gyŏng argued that language is an essential condition for the formation, independence, and development of the nation-state, which is consistent with the formation process of the Japanese ‘Kokugo’ consciousness (p. 76). Kanazawa Shozaburo, who spent most of his life studying Chosŏn (Korea) and Chosŏn language, also emphasized the meaning of Chosŏn language to Chosŏn people, even though he personally did not object to Korea-Japan integration. However, this book emphasizes that modern language perception is not only limited to nationalism. A contrasting school, emphasizing language as mere communication, also emerged in modern times. Kim B.-M. explained this with the term “language consciousness of isolation” (p. 52). Kim H.-S. also explains Choi Hyun-bae’s preference for Han’gŭl (the Korean writing system) as a desire for subjective, independent, and reasonable language education, as is advocated in Pestalozzi’s theory of education. Through this research, we can find that the modern language is a mixture of nationalist language and a language as an independent system.

Chapter two examines language education and policy not only for Koreans but also for Japanese in the modern period. Especially, it is interesting to look at the Korean (Chosŏnŏ) and English learning for Japanese. Yamada Kanto shows in his paper that the Japanese tried to learn the Korean language not only for domination, but also for various motives and purposes such as personal interests, job needs, and naesŏnyunghwa—removing confliction between Japanese and Korean peoples. Yoon, S.-A. argues that English education in Japan is “a method to spread imperialist values to Japan by recognizing the greatness of the British Empire” (p. 243), based on Okakura Yoshisaburo’s English education perspectives. These two research agendas suggest that even though Korean and English education are used to strengthen nationalism and imperialism, we still need to focus on individual learners as modern citizens.

This book is very valuable in that it approaches the process of formation of modern national language and modern style—which had been understudied by the East Asian literary field until now—as a problem of linguistics. Based on nine papers published in this book, we can explore how language consciousness had been constructed in a relationship with society and nation in modern Korea and Japan.