Progressive Education in Vietnam in the 1940s 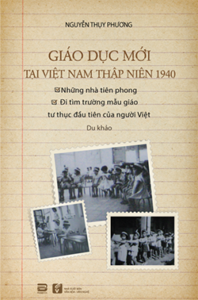 This short but minute piece of research disposes the mythical thinking that Progressive Education or Éducation Nouvelle was introduced into Vietnam in the 2000s along with the country’s economic-cultural opening and integration. As the book’s title firmly asserts, Progressive Educational thought – placing children at the center of the education system from which they naturally grow physically, mentally, and intellectually – was studied and experimented in the northern part of Vietnam as early as the 1940s. In the early days of the newly liberated nation-state, a group of local intellectuals who had been in the Scout Movement during the French colonial period were pioneers in opening the first Vietnamese private preschool. By digging through numerous family and national archives in France, Switzerland and Vietnam, as well as conducting in-depth interviews, the author was able to map out the route of Progressive Education from its cradle in Europe to its fertile land Vietnam.

Chapter 1 provides the historical background of the birth and growth of preschools in Indochina under French colonization and their underlying political motivations. Chapter 2 then acknowledges the role of the Scout Movement in shaping a “new generation” (71, 76-77, 156) of Vietnamese intellectuals, businessmen, educators and teachers, with their ideals for reform and desire for “self-reliant civilization” that motivated them to open two experimental infant classes in 1943-44. Chapter 3, the heart of the research project, follows the footsteps of teacher Nguyen Phuoc Vinh Bang from establishing and running Bach Thao – the first Vietnamese private preschool – based on his own understanding of Progressive Education in Hanoi in 1946, to his migration to Geneva where he became a renowned pedagogical psychologist, the right-hand man of Jean Piaget.

Through its surprising yet interesting discoveries, this micro-historical study involves far-reaching implications and raises broader questions of creativity, responsibility, dedication and courage for the educators of today and tomorrow. An earnest scholarly work written in the style of a travel journal, this book is of interest to both specialists and general readers.

While enthusiastically depicting the achievements of Vinh Bang and Bach Thao for “laying the foundation of kindergarten education in Vietnam” (156), nevertheless, the author seems to overestimate the importance of the historical events of this period. Even though they were established based on pure goodwill and highly progressive ideas, the experimental infant classes embraced a relatively limited scope and target students: urban kids from rich families around Hanoi. Bach Thao in fact existed for less than a year, with only 40-50 children enjoying its reformative model. No legacy of this school nor its principal Vinh Bang was traced in the preschools that were established later in the 1950s or post-1975 Vietnam. The fact that he moved to Switzerland together with all of his progressive reading materials, journals and experiences (similar to many of his Vietnamese elite colleagues) which were just unearthed 70 years later by the author herself, reflects the limitations of the people of Vinh Bang’s generation as well as their legacy. Nurturing talent and the flight of human capital, therefore, are among the other issues that arise while reading this book.

Despite the minor shortcomings, this exquisite book is a must-read and a source of inspiration for anyone interested in education, child development, pedagogical history and psychology.