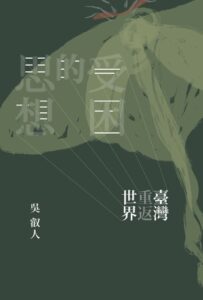 Taiwan’s democratization since the 1980s has taken place in the context of the multiple / serial colonization and modernization that preceded it, as well as the unresolved questions of the country’s political and legal status that persist. It is as a result of these factors that Taiwanese consciousness emerged rapidly among Taiwanese people. Reacting to and reflecting Chinese identity in Taiwan (ROC) and China (PRC), Taiwanese identity has grown stronger and more complicated as a result of democratization. But at the same time, it remains bound by East Asia’s geopolitical structure. This is why the Chinese title of Wu Rwei-ren’s collection of essays is Thoughts Bound: When Taiwan Rejoins the World. At the same time, its English title, Prometheus Unbound: When Formosa Reclaims the World, conveys how paradoxical the Taiwan issue is. Wu’s book takes the urgent paradox of this issue by beginning with a set of critical questions: What is Taiwanese nationalism? How did it sprout and grow at the margin of multiple empires in East Asia? And how does it overcome “the typical dilemma of nationalism (united identity) and liberalism (diverse democracy)”? (p. 27)

Wu’s book is composed of four parts: “unbound,” “re-bound,” “re-unbound I” and “re-unbound II,” reflecting Wu’s trajectory of thinking on this problem, a trajectory he describes in Chapter 5: “Comparative History, Geopolitics, and the Lonely Business of Doing Taiwan Studies in Japan: A Response to Benedict Anderson.” One of the foremost scholars of political sociology and history, an influential public intellectual, and the Chinese language translator for Benedict Anderson’s Imagined Communities, Wu attempts to articulate one sort of Taiwanese civic nationalism by considering Taiwan as an interface marginalized by different empires, or, in Wu’s words, “fragment of empires (帝國夾縫中之碎片, p. 12).”

In part I, “unbound” (chapter 1-3), Wu re-locates Taiwan within modern East Asia and historicizes the process of how Taiwanese identity was shaped from a global comparative historical perspective, in an attempt to provide what Wu describes as “a view from the top of Olympus.” (p. 87) By re-constructing the narrative of Taiwanese nationalism, Wu emphasizes that the daily practices, especially political participation such as voting, created a sort of non-essentialistic nationalism defined as a “comparatively stable allied relationship among people.” (p. 30) In this way, Wu liberates the concept of nationalism from the definition of nationalism that refers narrowly to the essentialistic nationalism of the pre-19th century, which claims that people in a nation state should share only one language, culture, and even ethnicity. The boundary of an existing political sovereignty——the Republic of China——offers Taiwan space and time for democratization and localization, the process which began with the Baodiao movement in 1971. In the book’s second part, “re-bound,” Wu investigates just who exactly is Taiwanese and how Taiwan has been discussed in the world by contextualizing Taiwan within the history of East Asia in an introspective way. Manifesting the Taiwanese people as pariahs (賤民, Jian min) trapped by postwar East Asian geopolitics, Wu explores the possibilities for overcoming the tragedy of Taiwan.

The third part is the book’s longest. “Re-unbound I” focuses on Taiwan’s historical relationship with Japan, in order to resist the over-embellished image of Japanese colonial history during the growth of Taiwanese consciousness as a presence of accusation toward the KMT’s reign of white terror in Taiwan. By clarifying the complicated history between Taiwan and Japan (including the Okinawa issue, Murayama Statement in 1995, and Ōe Kenzaburō’s writings on the Hiroshima issue), which has been manipulated and distorted by different interest groups and antagonistic allies in an oversimplified debate of binary opposition, e.g., “right wing pro-independence (nationalism)/neo-colonialism” vs. “left wing anti-independence (internationalism)/anti-colonialism” since the 1990s——the time Taiwan and Japan began to re-build their official relationship——Wu suggests that intellectuals should embrace their historical mission to face the history of the Japanese colonial period, and in so doing conduct their research calmly, rigorously, and fearlessly. Their efforts, he argues, will reduce the room for political manipulation and lead Taiwan to have conversations with other countries with equality, sincerity, and depth, based on the accumulation of historical studies and introspective morality. Moreover, Wu explores a number of case studies dealing with South Africa, Okinawa/Ryukyu, Hong Kong, and even Norway using a framework of comparative politics to place Taiwan in the context of global history.

The book’s final part turns towards issues inherent to Taiwanese society itself, pointing out the desire and the conspiracy of nationalism and capitalism in postwar Taiwanese history. Wu then emphasizes the significance of the local leftist tradition in Taiwan and claims that Taiwanese civic nationalism remains a critical, albeit incomplete, project for contemporary Taiwanese society.

Indeed, Wu’s is not a standard academic monograph. Yet, it provides the fresh perspective of comparative politics to recast the history of Taiwanese nationalism within the contexts of postwar East Asia and global history, demonstrating the possibilities of and limitations to shaping a nation in the contemporary world. Successfully challenging the prevailing opinion on the Taiwan issue——which invariably discusses it as a subpart of the China issue, producing illusory debates between left and right, independence and unification——this significant new work in Taiwan studies will stimulate and cultivate more meaningful conversations between scholars and students interested in sociology, political science, as well as the history of East Asia. Even contemporary activists in East Asia can benefit from Wu’s insights of how multi-layered history and intersectional identities have been shaped by the powerful coalition of capitalism and nationalism in Taiwan, particularly in this neoliberal age.