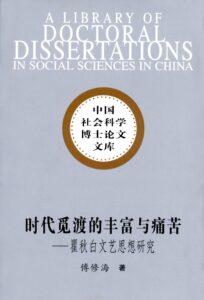 This is the last poem by Qu Qiubai (1899-1935), who was executed as a revolutionary in China several hours after it was written; each verse was drawn (with slight revisions) from his favorite poems of the Tang Dynasty poetry. Singing The Internationale and Red-Songs in Russian while being escorted to a place of execution chosen by himself, Qu sat in a lotus posture like a Buddha; he aspired to nirvana as he calmly faced the soldiers’ gunshots.

As a teenager, Qu was exposed to significant Taoist, Buddhist and Confucian writings, but he later became a communist leader in China after reading and having translated Soviet Marxism into Russian. During the final hours of his life, he wrote some poems and a confessional memoir to which he gave the title “Superfluous Words.” In these letters from his prison cell, he considered himself a “superfluous man” like Eugene Onégin’s (Евгений Онегин) character in Alexander Pushkin’s Russian novel. Qu remarked with self-pity, “You good-for-nothing fool, you once were a literatus.” In doing this, he paradoxically followed the poetic style of his predecessor Huang Zhongze (1749-1783), who proclaimed himself as “such a cipher…to be a poet.” The major difference between him and Huang, however, is that Qu was a communist leader, while the latter had nothing to do with politics.

Qu’s ambiguity in his writing style created an aura of obscurity to his works: his last words could not be understood by his peers, and the soldiers who executed him could not understand his songs. He was quoted as saying “Judgments can hardly be settled even after one’s death. Therefore, history’s coffin can never be closed.” One then wonders why, even after being tortured by physical illness and spiritual dilemmas, he still wanted to speak out, to write a “superfluous” memoir. The answer lies with the kinds of influences to which he was exposed during his lifetime: Russian Orthodoxy, Russian confessional literature, Confucian poetics and Marxist communism all contributed to his principles of self-expression and his predisposition to speak out even in the midst of death. He was obliged to express himself because of an “irresistible calling” that came from deep within his heart.

Eighty years after Qu Qiubai’s death, scholars have argued in vain regarding the proper interpretation of his literary works, and discussions about his legacy remain contentious and unsettled. However, Fu Xiuhai’s recently published book is a major contribution in understanding Qu’s literary corpus. Dr. Fu presents a comprehensive understanding of the complexity of Qu’s literary style and locates the controversial aspects of his writing within the general history of Chinese literary thought.

Dr. Fu starts with Qu’s early traumatic experience as a “pauper” after the suicide of his mother, and then as a “prince” in Soviet Russia and “Red” China, enabling Qu to transit from classical aestheticism to communist literary theory, from sentimental to radical. Qu’s experience may be said to have acted as a sort of “redemption boat” that ferried China from its traditional past to its “transcendent future” as a communist society. By underscoring Qu’s “profusion of painful sentiment” (which is the subtitle of this book, quoted from the modernist poet Mu Dan), Dr. Fu devotes five chapters to the ambivalence between tradition and modernity; the introduction of ideology from Soviet Russia to Soviet China; the popularization and revolutionizing of literature; the interaction between literary criticism and political propaganda; and realism and its limits. It is apparent that Qu’s life and work act as a “polyphony text” that interweaves romanticism and realism, literary aesthetics and political ideology, and Western theory and real-life practices on the ground. How did these seemingly contradicting ideas co-exist? How was Soviet theory indigenized to fit Chinese experiences? Dr. Fu provides a clear explanation as to how the poet-revolutionary, the leader of Left-Wing Writer’s League, utilized the power of discourse to persuade both writers and readers about the veracity of revolutionary claims.

One aspect that Dr. Fu’s book helps to elucidate is the bond of friendship between Qu and Lu Xun. Lu Xun treated Qu as his closest friend, and protected Qu when he was hunted down by Nationalist forces. From his end, Qu regarded Lu Xun as a foremost communist comrade. Because of Qu’s strong advocacy of Lu Xun’s writings, it may be said that Lu Xun was the “Christ” while Qu was the “Saint Paul” of Chinese Left-Wing literature. In fact, some of Qu’s critical writings in the 1930s were completed with Lu Xun’s input. Qu also compiled and published Lu Xun’s critical essays, which served to elevate Lu Xun’s status as a leader of the Left-Wing Writers’ League.

Dr. Fu recognizes Qu and Lu Xun’s similar views on the necessity of the “Latinization” of Chinese for the new nation. Another similarity between the two writers pertains to the method of popularizing literature and art, which became the precursor of the Yang-An Art movement, as well as the Seventeen-Year Literature and even the Art Criteria for the new Republic. Nevertheless, Dr. Fu also points out that Qu went further in advocating a so-called “revolution of literary tone.” Qu’s brand of nationalism called for the invention of a national language, especially with regard to the issue of the “unification” of Chinese characters and their phonetic meaning.

The abolition of traditional Chinese characters in favor of a more “Latinized” Chinese did not take hold in China, but the popularization of literature was successful, largely because the process was aided by a supportive political climate. In presenting the tension between literature and ideology, Dr. Fu correctly stresses the importance of the Left-wing turn in Chinese literature. Qu’s literary thought was largely responsible for this Left-wing turn, and it has significantly affected post-revolutionary literature in the People’s Republic of China. In a sense, literature became a tool for political control, attached as it were to the “political Juggernaut” that successfully crushed any obstacles lying in its path.

In the process of appropriating the two writers’ works during the last eighty years, the more “transcendent” aspects received less attention; instead, the radical-communist aspects were vigorously pursued by their followers. Dr. Fu explains that the legacy of Qu’s literary thought became almost a totem for Left-wing writers, but his writings became a taboo and did not receive adequate evaluation by his followers. Nevertheless, from Qu’s literary thought, to Yan An’s literary movement, to the collective writing in new Republican literature, a new Chinese literary tradition was invented. But in the process of making a tradition, Qu’s unique contributions to Chinese literary theory became less obvious and sometimes became totally obscured. Dr. Fu recovers a fuller awareness of the unique contribution of Qu’s literary thought to modern Chinese literature.

This book can be regarded as an insightful biography of Qu’s life, in the sense that it analyzes the complexity of the relationship between literature and politics. From childhood to death, Qu’s story was discussed alongside the rise and canonization of modern Chinese literary theory. By this, readers are given a clear and systematic presentation of the transition from Chinese classical literary tradition to Left-wing critical tradition. From the 1930’s onward, Chinese literature was overtaken by communist ideology; in the same vein, Lu Xun’s works were extolled, while other literary works by competing writers were marginalized.

Dr. Fu also discusses Qu’s realization that social realism has its limits; up until the book’s nuanced discussion of the matter, this remained a very sensitive aspect in Qu’s writings. As “a middle object of history”, Qu and Lu Xun were both limited by their social conditions, but they also transcended their immediate socio-historical existence. Their thoughts about realism, while remaining rooted in real-life situations, transcended the paralyzing implications of looking at just the limitations of “the real”. Qu’s study of Soviet communism in the end did not simply discuss social conditions in Russia and China; meta-history should not be confined to the study of specific historical cases, but should transcend them in favor of larger historical significations. This transcendentalism may also be the reason why he named his last words Redundant Words. Qu quoted some verses from The Book of Songs in the preface of Redundant Words:

Those who knew me

Said I was sad at heart.

Those who did not know me,

Said I was seeking something.

O thou distant and azure Heaven!

By what man was this [brought about]?

This fading wail is continually echoed by Dr. Fu’s book.