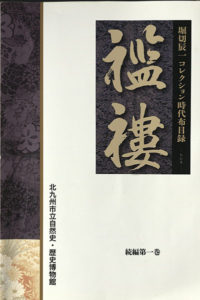 Tatsuichi Horikiri’s monograph is a poignant work about the lives of rural Japanese focusing mainly on Meiji (1868-1912), Taisho (1912-1926) and Showa (1926-1989) periods. The book is part of a three-volume series. As part of the research, Horikiri collected around 3,500 pieces of clothing. Out of the total collection, this book includes over 500 items each of which comes with a description and a color photograph. The description includes details not just about the material but also regarding the person who wore it, highlighting his or her socio-economic conditions. The information was collected through oral interviews. The items collected are not restricted to age or gender.

It is intriguing to note that the author decided on the title, ‘Rags’ (襤褸) for his book. In the introduction, Horikiri mentioned that there were occasions when his collection in the Kita Kyushu museum was referred to disparagingly as “scrap” (p.5). Far from that, the work is an example of meticulous academic scholarship. Horikiri’s belief that clothes have a heart made him beautifully capture the lived experiences of common people through the discarded clothes of the past.

The author of the book is not a historian by training (p.6). Due to this, while doing his research or writing the book, he was not necessarily constrained by the restrictions of the discipline. For instance, the whole book is divided into only two sections titled festive clothes (晴着) and outdoor clothes (外出着) and items are not arranged chronologically. If the same work was pursued by a historian, perhaps the writing style would have been a little different. Horikiri’s style does not undermine the value of the book in any way. The wide range of examples followed by a detailed explanation perfectly capture the mood of everyday life in Japan. Each clothing item presented is capable of telling a unique story and creates powerful visual imagery of nameless people from the past. For instance, through the example of a woman’s skirt (numbered 598, p.105) from the 1950s, Horikiri made a fascinating connection of the style to the emergence of the word (romantic) “date” (デート) within the Japanese language.

The book is a nuanced work which resulted from painstaking research spanning many years. The study will be of interest to students particularly of social history. This kind of approach to retrieve the past of the non-elites through both material culture and oral history is capable of yielding exceptional results. It would be worth translating the whole series for a bigger audience who would greatly benefit from the scholarship.