The Rebellion of the Chinese Commoners on Phlapphlachai Road 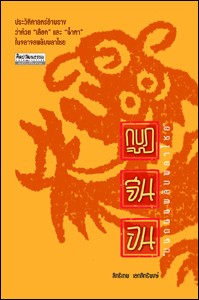 There are many works on Thai-Chinese in Thailand, for example, William Skinner’s Chinese Society in Thailand: An Analytical History (1957), Pimpraphai Bisalputra’s A History of the Thai-Chinese, Charnvit Kasetsiri’s Kon Jean 200 Pee Tai Phraboeom Phothisomphan [200 Years of Chinese Under the Majesty’s Bounty] (1983), Jumnongsri Ratnin’s Duj Nava Klang Mahasamud [Boats in Mid-Ocean] (1995), etc. However, most of these works focus on upper-class Chinese who influenced the Thai economy and society and had a connection with the Thai monarchic group. The connection between the Chinese and Thai monarchic groups encouraged the wealthy Chinese to expand and develop their business empire, thus dominating the Thai economy. Thus, the wealthy Chinese and Thai royalists exchanged benefits in both political and economic ways, which affected Thai society until recently. Upper-class Chinese support fulfills the idea of gratitude and loyalty to the dynastic family that leads to the illusion and unreal image of Chinese history in Thailand: Thailand is a country without discrimination and the Chinese community lived happily in Thailand under the Majesty’s bounty.

The upper-class Chinese idea and political agenda conceal the history of ordinary and lower-class Chinese. Lacking capital and education meant Chinese commoners could not climb to a better life. Ordinary Chinese who could not make a connection with the central power were left behind. This consequence of the social structure is barely studied in Thai and international academic fields. Therefore, Sittithep Eaksittipong’s work is outstanding in terms of its originality. Based on fruitful research and employing various research methods, Eaksittipong explains the forgotten history of Chinese commoners. Under the conditions of the Cold War era, Eaksittipong argues that the dramatic suppression of ethnic Chinese in Bangkok was the result of the world’s political situation. Thailand, under the United States’ influence, tried to assimilate ethnic Chinese, resulting in humiliation and discrimination by Thai authorities. The oppression by the state and Thai majority developed a social hierarchy that put Thai and upper-class Chinese on the top and poor Chinese on the bottom, which produced genuine grievances for the Chinese commoners. Moreover, the rapid transformation of the world’s economic and social development disseminated the idea of an uncertain future in the Chinese commoners’ sentiment. The outcome of these complex conditions was the rebellions on Plapachai Road in 1974.

While The Rebellion of the Chinese Commoners on Phlapphlachai Road is an in-depth and valuable study of Chinese in Thailand, it had a few flaws as an analysis of Chinese society at that time. First, the writer connected the cause of the rebellions as the consequence of the uprising of October 14, 1973, which was against the dictatorship in Thailand. This movement was the political watershed in Thai history and the rise of student activism in Thailand. Eaksittipong pointed out that this uprising influenced the Chinese by creating a sense of unity, especially against Thai authority. However, the author did not describe the significance of labor unions at that time. Even before the October 14 uprising, around 141 strikes occurred in the period from 1966-72. After the revolt, 138 unions were established in many sectors, which affected the mindset of the labor class. The connection of the labor movement and the spread of social movement sentiment might be involved in the rebellions on Plapachai Road. To emphasize only the Chinese commoners’ movement by separating them from other lower classes of society may lead to the miscalculation of important details about this historical event.

Second, although Eaksittipong has gathered a variety of materials for this study, Chinese language documents are lacking. The Rebellion of the Chinese Commoners on Phlapphlachai Road gives details about how Chinese newspapers’ popularity increased during that period and how they were read by the Chinese community. However, the writer did not provide information about the reaction of Chinese newspapers after the rebellions were over. Print media was an essential tool for creating solidarity among the diaspora in a foreign land. Therefore, the reaction from the Chinese newspapers after the radical movement and bloody suppression may provide a better picture of the minority ethnic Chinese in Thailand.