Recording Studio in the Rainforest: Hybridization of the Indigenous Music and Globalization from the Peripheral Small Islands 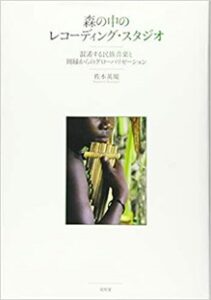 This book is an ethnography that discusses how the ’Are’are people of Malaita, in the Solomon Islands, experience and encounter a globalized world through the mediation of the local bamboo panpipes ensemble. Organized into four parts, the first, entitled “Globalization and Musical Mediation,” reviews previous studies on Melanesian indigenous music and discusses how the musical globalization in the Melanesian Islands today is a kind of cultural encounter through musical mediation.

In part two, “‘Blended Lives’ and Bamboo panpipes in ’Are’are”, the author discusses the connected lives of both the global and the local in a contemporary ’Are’are village, and the position of bamboo panpipes in this context. As a result of globalization, the local players tune the bamboo panpipes based on Western musical scales and often use sound technology such as microphones and speakers in their performances. However, they are not passive recipients but readily combine Western modern lifestyles with their traditional one. When talented players get paid after the performance, they think that this is because of a magical effect that brings wealth to the performers by captivating the listeners. This way of thinking is connected to the conventional market logic there rather than a modern market one.

In part three, “Bamboo Panpipes and the Globalization of Music,” the author analyzes two cases of collaborative production of CD recordings between the ’Are’are people and Westerners. The first case is the process of recording a performance in an outdoor improvised studio made of materials in the local rainforest such as banana leaves, and the second is a performance tour to a rock festival in Japan. In both cases, the author discusses the differences between the ideal notion of music and the sound between an English music producer, an Italian recording engineer, and the ’Are’are performers, as well as the process of negotiation and compromise between them. Despite diverging musical backgrounds, each party managed to successfully collaborate with the other through the mediation enabled by the panpipe ensemble performance.

This book is a robust and comprehensive ethnography of anthropology of music based on meticulous fieldwork that places importance on the perspective of local people. As the author states, this book itself, which describes the mediation of music, is “a heuristic mediation for generating new questions” (p. iii) for readers.