The Relationship between Hanyeping Enterprise and Government 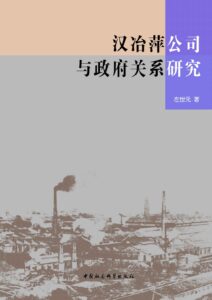 The Relationship between Hanyeping Enterprise and Government is a new book, written by Zuo Shiyuan (左世元) and published by China Social Sciences Press in 2016. This book focuses on a modern enterprise, Hanyeping, located in Hubei and Jiangxi provinces. Tracing its origin and development, the author seeks to examine the changing relationship between the enterprise and state in the beginning of the 20th century.

Established in 1908, the development of Hanyeping occurred under the impact of different political regimes in the 20th century. From the Qing government to the short-lived government of Yuan Shikai (1911-1912), and from the Provisional government of the Republic of China (1912-1913) to the Nationalist government (1925-1948), the goal of Hanyeping kept shifting with the changing political agenda of successive governments. For example, the creation of Hanyeping originated in the self-strengthening policies promoted by the Qing government. The Huguang governor-general, Zhang Zhidong, sought to propel political reform and economic industrialization to save the empire. However, a lack of wherewithal for creating Hanyeping forced Zhang to make allies with the local merchants and gentries, who possessed extensive coal pits and iron mines. Consequently, a particular model of management, the guandu-shangban (official supervision and merchant management), came into being. Local gentries held great sway in management, appointed their kinsmen to oversee all aspects of coal extraction, iron production and distribution, which then led to serious problems, such as productive inefficiency, corrupt management and sporadic output.

With the Revolution of 1911, the Qing government was overthrown by revolutionaries. The president of Hanyeping, Sheng Xuanhuai (盛宣怀), fled to Japan and the enterprise, without powerful leadership, fell into immediate chaos. To rescue the company from bankruptcy, the Provisional government of the Republic of China confiscated Hanyeping as state property. Since the Provisional government was not a unified political entity, but consisted of different warlords, the struggle for control of Hanyeping among different factions, local strongmen and foreign powers (Japan) was incessant and fierce during the entire period of the Republic of China. The intricate struggles exerted enormous impact on the company’s leadership structure, management mode, efficiency and gross profits.

In the final section, the author attempts to conclude that Hanyeping was a typical case revealing the relationship between the state and enterprises. At the turn of the 20th century, the destiny of any enterprise, like Hanyeping, was intertwined with the fate of the state. This book shows us a different history of Hanyeping that enriches our perspective of the impact of politics on economic production.