Religion and Society in Java: Ethnographic Memoir of Indonesia under Suharto’s New Order 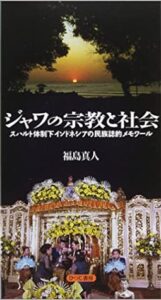 Masato Fukushima’s ethnographic study of religion in Java offers insight into issues concerning religion in Indonesia. Fukushima explores how each “religion” came to be defined under the national order through struggle for status or assimilation under government pressure. His interests range from detailed descriptions to elaboration of a general framework for analysis. Although the Suharto order fell in 1999, this book is still valuable in considering religion in Indonesia today.

The background to this book was the fall of the Sukarno order due to the September 30, 1965 incident, which followed the purge of communists. Under the new Suharto regime, the government initiated a New Order (Orde Baru), which took economic development (pembangunan) as its main theme. Communism was prohibited. Against this background, Fukushima conducted fieldwork in Java for his doctoral dissertation, on which this work is based.

The following is the structure of this volume:

Appendix: The Emergence of “Belief”: The Struggle of Minor Religions in Indonesia.

In his Introduction, Fukushima criticizes the methodologies of previous studies, which were strongly influenced by Clifford Geertz’s Religion of Java (1960). Geertz suggested there are three types of religion in Java, which were closely related to social status and political view. However, Fukushima finds this approach inadequate for the reality he experienced in Indonesia. And he searches for another framework.

Chapter 1 is about the re-self-definition of Nahdlatul Ulama (NU) against pressure by central government aimed at separating politics and religion and depoliticizing Islam. NU is the largest organization of conservative Muslims in Indonesia. In spite of the oppression of religious and political parties by the Suharto government, only NU could keep its identity, becoming the basis of the Development Union Party (Partai Persatuan Pembangunan), one of the recognized political parties. Fukushima points out the Pancasila, the official philosophical foundation of Indonesia, had an impact on Islam because the government ordered every organization to accept the tenets of Pancasila its principle. There was therefore a tension between Islam and politics. Fukushima explores how NU members defined their views of Islam and politics in light of their different backgrounds, and how the relationship among them developed dynamically.

In Chapter 2, Javanese mysticism (Kebatinan) is discussed. Kebatinan is peculiar to the Javanese, but each kebatinan group varies in form and scale. This has generally not been regarded as religion, but rather as culture. Followers of kebatinan struggled to establish their official status and identity outside the framework of “religion” in Indonesia.

Chapter 3 concerns the Javanese Peasant (Samin) Movement. This was an anti-colonial peasant movement whose members were focused on land reform. Fukushima analyzes their language and doctrine, and tries to place them in the larger cultural context of Indonesia.

Chapter 4 reconsiders the approach for analyzing Indonesian religion. In this chapter, Fukushima reexamines theories based on social stratification and the social division of labor, and elaborates a framework of “demand for totality,” which means that religion demands involvement in all other domains of life. Although Islam and Saminism have different “types of representation of demand,” it can be said that both of them tried to accomplish a wholesale configuration of life, in which religion is not separated from any other part. Fukushima points out that both groups created their options within a more complex structure, although these options could only be potential ones under the Suharto order. He concludes his book by speculating on possibilities of this potential being incorporated into the post-Suharto order.

The appendix is an exciting paper about the emergence of “belief” status in Indonesia. Fukushima describes the process of Bali Hinduism being recognized as one of the official religions and that of Kebatinan obtaining “belief” status against the background of the national government’s definition of what constitutes religion.

This book is a basic work for any student interested in the relationship between politics and religion in Indonesia. It is significant because it describes three different kinds of religions and tries to analyze them afresh, based on a thorough review of previous studies and sociological theories. Fukushima offers insight into the dynamic relationship between religion and people. Of course the Suharto order is past, but even now, this work retains significance for students of religion as well as area specialists.