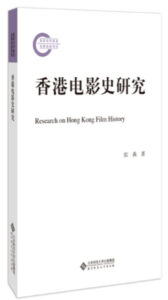 The author has established a structure combining “plane” and “point”, that is, by combing through the century-old of Hong Kong film history, forming a longitudinal coordinate for the study of film history, using it as the “basic plane” to radiate different microscopic research points, such as multiple scattered research on genre, director, cultural phenomenon, cross-border cooperation and distribution of films. This forms the four characteristics of the book: the condensed nature of writing film history, the divergence of explaining film phenomena, the relevance of issue-oriented thinking, and the cross-border nature of film industry analysis.

Based on film history, this book explores film phenomena in a divergent manner. Important genres of Hong Kong movies, such as martial arts films, comedy films, gangster films, urban romance films, and musical films have been systematically and deeply explored. The director, the creator of film works, is also an important entry point for film research. The author selects and analyzes representative directors from different stages of Hong Kong film history. This is combined with the author’s earlier experience in interviews and dialogues with famous Hong Kong directors (Legend of Hong Kong Film, Peking University Press, 2006). The thinking in this book extends from film works and filmmakers to the relationship between film and social culture, and the phenomenon of cooperation across regions, countries, and media in film production and distribution.

The book’s narrative structure, which combines historical clues with film phenomena, provides potential issue-oriented thinking and the freedom to skip around to different chapters. Readers can extract specific questions from clues in film history and get responses in the author’s subsequent explanations. Conversely, readers can also accurately find the position and specific context in film history when discussing a certain film or a certain director. For example, readers who are interested in Bruce Lee’s martial arts films can find the transformation of martial arts films in the 1960s in the chapter “Film History,” and the specific characteristics of martial arts film in the “Genre” chapter, furthermore, readers can discover that Bruce Lee’s martial arts films were once booming in Hollywood in the chapter “Crossing the Boundaries”.

Crossing borders to explore film phenomena is also a breakthrough in the thinking of this book. The adaptation of literature to film, the co-production between mainland China and Hong Kong, as well as the distribution of Hong Kong films in Japan, South Korea, Southeast Asia, and other places show the transboundary nature of Hong Kong films. This also explains the charm of Hong Kong as an “Oriental Hollywood,” its cultural hybridity, flexibility in market operation, professionalism in production, and wide-area spread. This also provides a new way of intellection for the study of Hong Kong films, not only to break the geographical limits of Hong Kong, but also to transcend a one-dimensional research perspective, and conduct research on Hong Kong film history from a multi-dimensional perspective.

As film historians Robert C. Allen and Douglas Gomery said in Film History: Theory and Practice (Alfred A. Knopf, 1985), “One exciting thing about film historical research that sets it apart from some other branches of history is that it can be conducted nearly anywhere.” Professor Zhang Yan’s new book Research on Hong Kong Film History provides a unique perspective and paradigm to enter the research field of Hong Kong film history.