Research on the Philosophy of Hua-yen Buddhism 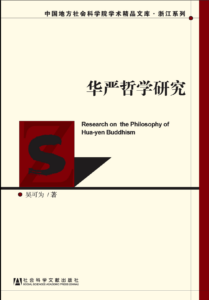 Wu Kewei’s book, Research on the Philosophy of Hua-yen Buddhism, provides a comprehensive overview of the lineage and theoretical characteristics of Hua-yen philosophy, a representative part of Chinese Buddhism. Although the title contains “research on the philosophy,” it is based on the reflection on Buddhist studies in the context of modern philosophy and religious studies. The author attempts to detach himself from the currently popular concepts, discourses, and methods born in the soil of Western scholarship, and to make a modern interpretation of the philosophy of Hua-yen Buddhism based on Buddhism itself. The author points out that “as one of the last established sects of Chinese Mahayana Buddhism, the philosophy of Hua-yen is the culmination of the Indian Mahayana schools of mādhyamaka, yogācāra and tathāgata-garbha, and represents the pinnacle of Mahayana Buddhist thought as well. A modern interpretation of Hua-yen philosophy is appropriate to provide a holistic interpretation of Buddhist thought from the Buddhist perspective.” (p.17) What new perspectives, then, can this discourse grounded in Buddhism’s own position open up for us? It can be said that this position is essentially present in the overall layout of the book as well as in the specific arguments.

In the “Introduction” section, the author provides a clear overview of the similarities and differences between Buddhism, philosophy, and modern religious studies. Unlike philosophy, which is generally based on man’s confidence in his own reason, Buddhism is always highly alert to and reflective of all forms of anthropocentrism, and the reason is like a mirror, which needs to be illuminated by the guiding light of the Buddha and Bodhisattva, and both are mutually reinforcing. Moreover, unlike philosophy, which is usually presented as purely “thinking” or “reflecting”, the opening up of truth in Buddhism is indicated as being first and foremost about action, not merely about thinking.

In the first chapter, the author introduces the source of Hua-yen philosophy, the Hua-yen sūtra（Avataṃsaka-sūtra）, and the respective meanings of Hua-yen sūtra and Hua-yen philosophy in relation to it, and points out the problems and misconceptions of modern Hua-yen philosophical studies from the Buddhist position. Taking the “Golden Lion Metaphor” commonly used in Hua-yen studies as an example, the author points out that the popular opinion today is to understand “dharma-dhātu” and “dharmatā” as some kind of universal essence or transcendent entity. The interpretation of “arising from the original nature (性起)”  and “arising from the dharma-dhātu (法界緣起)”  as some kind of ontological philosophy not only completely conceals and obscures the true meaning of Hua-yen philosophy, but actually reverses it fundamentally. This popular misunderstanding is the result of the fact that the deconstruction of the concept of “self-nature” and entity by mādhyamaka and yogācāra is not considered as the necessary precondition for the interpretation of Hua-yen Buddhism, but only focus on the specific concepts that distinguish Hua-yen from other schools, such as the “six characteristics of dependent arising” (六相)  and the “ten kinds of profound doctrine” (十玄). In other words, the core ideas and fundamental spirit of Hua-yen philosophy can be truly revealed only in the context of the overall foundational vision provided by the teachings of mādhyamaka, yogācāra and tathāgata-garbha. And this is the guiding idea that the author specifically develops in the remaining two to four chapters of the book.

The second chapter of this book provides a detailed philosophical analysis of the theoretical foundations of Hua-yen philosophy from the three aspects mentioned above. The author provides an in-depth interpretation of the core concept of mādhyamaka philosophy and Mahayana Buddhism, “emptiness”, which is considered to be a theory of being that opens up the way, meaning, and truth of real existence, a thoroughgoing philosophy of phenomenalism and anti-substantialism, with a negative meaning in name. In addition, the concept of “self-nature”, which is closely related to “emptiness”, is analyzed from various perspectives, especially on “inseparability” and “identity”. In contrast to mādhyamaka, which is devoted to the “emptiness in dependent arising”, yogācāra focuses on the “dependent arising in emptiness”. Compared to the first two schools, which were popular in ancient India, the thought of tathāgata-garbha, which is the mainstream of Mahayana Buddhism throughout East Asia, has been criticized in recent times, for example, for being based on the fundamental ontology. In this regard, the author continues from the previous article and points out that tathāgata-garbha is precisely a teaching based on mādhyamaka and yogācāra, and that ignoring this foundation and taking it out of context inevitably leads to misunderstanding. Tathāgata-garbha is not an entity, but the being that points to the existence of the entity, i.e., some real way or an open state of the entity. Further, only by considering these three as a mutually supportive whole and foundation can one truly and accurately understand Hua-yen philosophy. In the third chapter of this book, the author reveals the relationship between mādhyamaka, yogācāra and tathāgata-garbha, as well as its own unique value, from the theory of Hua-yen school’s classification of Buddha’s teaching. In the fourth chapter, the author enters into the philosophy of Hua-yen itself and shows the depth of its interpretation from four aspects, namely, mādhyamaka, yogācāra, tathāgata-garbha and the Hua-yen sūtra.

It is not difficult to find that the author’s insistence on the “Buddhist perspective” is mainly reflected in his attempt to prove that the philosophy of Hua-yen is based on the development and the in-depth interpretation of the three ancient Indian Buddhist teachings, and to refute the doubts of some scholars about the legitimacy of Chinese Buddhism. There is even a tendency to find ancient Indian sources for each theory of Hua-yen. However, according to the author’s repeated emphasis on the core Buddhist doctrines of dependent arising and emptiness, the specific manifestations of Buddhism in ancient India and China must have differed according to numerous cultural and geographical differences. An overemphasis on the inheritance and deepening of established schools of thought in ancient Indian Buddhism, without addressing the existing intellectual resources in China, is bound to remain in lengthy debates with skeptics. To discover the unchanging core of the variable Chinese and Indian Buddhism through comparison is perhaps a true return to the author’s insistence on the “Buddhist perspective.”