Revolution and Lyricism: Cultural Politics of the Southern Society and Chinese Modernity (1903-1922) 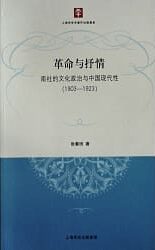 One of the most significant literary and political organizations in late Qing and early Republican period was the Southern Society (Nanshe, 1909-1922), whose members participated intensively in the Chinese nationalist movement, and at the same time produced a large corpus of literary writings, especially classical Chinese poetry. Historians have eulogized their political achievements before and during the revolution and lamented their failures after the establishment of the Republic, while literary scholars have tended to undervalue their nostalgic literary practices. Unsatisfied with the simplistic division between politics and literature represented by current scholarship, Zhang Chuntian’s new book attempts to unravel the cultural politics of Nanshe by situating the society within both indigenous and global cultural contexts.

Unlike previous studies on Nanshe, Zhang views the society as a mirror reflecting the rise of Chinese modernity and attempts to offer a new interpretation of late Qing and early Republican political culture. His ambitious approach is seen in his reliance on rich scholarship in Chinese history, Chinese literature and critical theory, all of which is carefully reviewed in the introduction to the book. Zhang directs us to famous Japanese scholars such as Yoshimi Takeuchi and Nishi Junzo; among Western academics, his work was influenced by Benedict Anderson’s “imagined community,” Raymond Williams’ “structure of feeling,” and David Wang Der-wei’s “Chinese lyrical tradition.” By synthesizing the above-mentioned discussions on Chinese modernity, Zhang lays the ground for analyzing the cultural politics of Nanshe.

Apart from the introduction and conclusion, Zhang has structured his book into six chapters, each dealing with one aspect of Nanshe’s political and cultural agendas. In Chapter 1, Zhang positions Nanshe within its historical and cultural context and demonstrates that the society, although claiming to be modeled on traditional literary clubs, was comprised of modern intellectuals who dedicated themselves to revolution. In Chapter 2, Zhang looks at Nanshe members’ revitalization and invention of local traditions of the Yangtze River Delta region. Zhang argues that Nanshe members’ collective efforts to revive local historical memory, local learning and the discourse of national learning were not elicited by cultural nostalgia, but stemmed from political concerns. In Chapter 3, Zhang revisits Nanshe members’ anti-Manchu discourse. Witnessing the threat of imperialism and capitalism, Nanshe leaders attempted to place Chinese nationalism within a global context and likened Manchu rule to colonial power. By promoting revolutionary ideas, Nanshe members played a pivotal role in bringing about China’s transition from empire to nation-state. Chapter 4 takes a “New Cultural History” approach to Nanshe members’ appropriation of drama, ritual and photography. Terming their practices a “performance of revolution,” Zhang illustrates the dynamism of the new political culture created by Nanshe. Chapter 5 discusses Nanshe members’ contribution to the formation of a Chinese public sphere. It begins with a description of Nanshe members’ active involvement in the public media, and then moves on to a vivid analysis of how those forerunners of Chinese journalism exerted influence on public opinion. In Chapter 6, Zhang turns to Nanshe members’ obsession with classical Chinese poetry. Incorporating recent discussions on Chinese lyrical tradition, Zhang contends that Nanshe poets’ lyricism represented a specific structure of feeling in the late Qing and early Republican periods, converying an illuminating emphasis on Chinese “emotional modernity.”

To summarize, Zhang Chuntian has written not only a specialist study on Nanshe, but also a comprehensive study of late Qing and early Republican Chinese politics and culture. Informed by debates on Chinese modernity and cultural politics, Zhang’s work succeeds admirably in presenting the intricacies of Nanshe’s political and cultural practices and urging us to re-evaluate the “emotional revolution” in modern China.