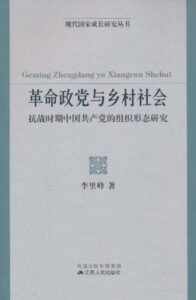 The historiography of the Chinese Communist Party (CCP), especially the historiography of the Party’s organizations, tends to focus on interpreting its institutions and practices. Instead of separating institutions and policies from practices, Li Lifeng’s book provides a comprehensive understanding of the interplay between politics and institutions and between politics and society. Li uses the Shandong Anti-Japanese Base Area as his main case in order to analyze several key issues in the CCP’s organizational history: the social composition of the Party and cadre members; the Party’s recruitment institutions; the different types of cadres and the relationships among them; the status and effects of local Party organizations; and the creation and maintenance of organizational discipline. In addition, through comparing the organizational and operational styles of the CCP and Kuomintang (KMT), the book explores the similarities and differences and advantages and disadvantages of the two parties to answer a fundamental question: why did the CCP the succeed in the anti-Japanese war period?

Li’s main sources are Party documents from various administrative levels, including the archives of revolutionary history from Shandong Province and The Selected Archives of Shandong Revolutionary History (Shandong geming lishi dang’an ziliao xuanbian), which was published in the 1980s. They include Party documents from central, provincial, district and county-level archives. The most important sources are work reports (gongzuo baogao) about the organization of the Party in the districts and counties. Li’s statistical data and his vivid description of the Party’s organizational operations all come from these sources.

As Li explains, “Party documents are still the most valuable materials about the organizational situation of the CCP. It is not only because there are no better materials for us to approach historical facts, but also because not all of the Party’s documents are abstract, theorized or even false” (p. 22). It is still possible for scholars to reconstruct, with caution, the organizational history of the CCP.

The work reports were a kind of summarizing document in which the information about process was relatively limited. Treating the documents as a kind of medium, rather than text, we are compelled to ask several questions: Who was the author? Who was the reader? What was the relationship between the authors and readers, between supervisors and subordinates? Why did some information appear in these documents while other information was absent? Anyway, these questions fall outside of the book’s primary focus, which is reconstructing the organizational history of the Shandong CCP during the anti-Japanese War period. Moreover, it would be extremely difficult to conduct this research in the whole of Shandong Province.

The book is comprised of six chapters: an analysis of the social composition of CCP members; an analysis of the social composition of cadres; the structure and effects of the CCP’s organization; the political socialization within the CCP; organizational disciplines and implementation; and the relationship between the Party and politics. All of the chapters complement each other and work well together to reconstruct the organizational ecology of the Shandong CCP.

Li provides us with a very impressive and detailed discussion about the development of local party branches during the anti-Japanese War period. The Shandong CCP developed extremely quickly during this time, though several “heterodox” recruiting modes were prevalent among the local party branches. To fulfill the task of recruiting Party members, some people were pressganged into the Party. In some places, whole families or even villages joined the Party. Sometimes, the people who had taken training courses were all registered in the Party. Though these recruitment modes ran counter to the CCP’s ideology, large amounts of peasants joined the CCP and greatly expanded its strength in the countryside. Thus, the CCP’s adaptability in its tactics, not its emphasis on ideological purity, strengthened the Party at this stage; this is one of Li’s most insightful observations.

During the anti-Japanese War period, the local organization of the CCP still suffered from several shortcomings. It was difficult for it to transmit information between the district and county committees and the local party branches. Superiors could not properly direct the local branches, either failing to communicate with them at all or directly governing them in a dictatorial manner. Very few local branches could recruit Party members or collect membership dues on a regular basis, and they struggled to effectively implement inner Party democratic consultation. They were even less capable of educating members, mobilizing the masses, and achieving authority in their daily work. Though the rectification of the Party’s operational style in the late period of the war improved its organization, the problem of ineffectiveness could not be resolved completely. Although the organizational tools of the CCP were not flawless, they were relatively strong in comparison to those of the KMT.

The interaction between the political culture of the CCP and rural society discussed in the book inspires us to think further. If we could escape from the narrative of Party documentation to some extent, and examine the “heterodox” recruiting methods and later rectification movement as a whole, we may find that “heterodox” forms of recruitment were an integral part of the Party’s mass mobilization and political education efforts. Flexibly drawing upon the original local social structure (such as the lineage and kinship ties) ensured that the CCP could recruit large numbers of members quickly and obtain sufficient initial support. These “heterodox” recruitment techniques established the CCP’s critical points of entry into the villages. An exploration of these recruiting methods themselves in greater detail would show us how exactly the political culture of the CCP was introduced into the villages and how this new political culture interacted with the villages’ existing social structures. To achieve this goal, available archives alone would most likely be insufficient, and would necessitate supplementary evidence through fieldwork and local historical documentation. Overall, Li’s book is a solid and insightful analysis of the CCP’s organization in the anti-Japanese War period, and will certainly be of great relevance and interest to scholars of contemporary Chinese history and politics.