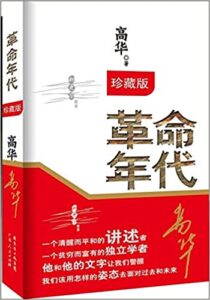 The late Gao Hua, who was born in 1954 and passed away at the end of 2011, was a distinguished scholar whose impressive academic achievements and exceptional character were described in a book entitled The Historical Scholar Gao Hua (Shi Jia Gao Hua, 2012). Although not supported by the CCP, he had made major contributions to academia. Curiously, he published few books and was called “one book Gao Hua” by Xu Qingquan, the chief editor of Yanhuang Chunqiu, in sharp contrast to many famous scholars who published numerous books. The “one book” referred to by Xu is How Did the Red Sun Rise? The Causes and Effects of the Yan’an Rectification Campaign (Hong taiyang shi zenyang shengqi de—yan’an zhengfeng yundong de lai long qu mai, 2000). It was published in Hong Kong, which made it inconvenient for scholars to acquire the book in the mainland. Besides this book, Gao published a collection of several articles entitled Revolutionary Times (Geming Niandai) in 2010 through Guangdong People’s Press. The chapters in this book had previously been published in different journals. These essays demonstrate Gao’s acute historical sensibility.

The title of Revolutionary Times reflected the author’s understanding of modern Chinese history. For Gao, “revolution” was the key word of this period. There are five parts in the book, respectively titled “The Ten Years of Nanjing”, “‘Prince’ Sun Ke,” “Revolutionary Words,” “The Rapid Flow of the New PRC Period”, and “Observation and Historical Materials.”

In the first part, the central essay is “The Foundation and Dilemma of the Authority of the Nanjing National Government.” The author makes a careful and detailed analysis about the early plight of the KMT’s governance style, “ruling the country by the party,” and proposes an answer to why the KMT failed to achieve the successful transformation of Chinese society.

The author researched Sun Ke (the son of Sun Yat-sen) as a doctoral student, and all seven essays in the second part are about Sun Ke, including his political ideas and the strengths and weaknesses of his personal character in different periods, providing a complete portrait of “Prince” Sun Ke.

There are nine essays in the third part, which analyze the CCP’s and Mao Zedong’s discourse. In the eyes of the author, “revolution” is not an abstract symbol but rather a series of specific actions. From the internal reorganization to thought reform and reeducation, specific organizations of the CCP took charge of their own areas, forcing everyone in Yan’an to adapt to the demands of Mao. The political culture that formed in Yan’an was the product of special war times; however, when this revolutionary logic became routinized as custom, it would achieve even greater power, as was proven by its subsequent historical development.

Let me take “The Birth of the “New People” as an example. The author investigates how the Party rectified ordinary revolutionaries during the Yan’an Rectification Movement. The practices employed included “search and queue investigations”, “self-explanation and self-examination”, “transferring files,” and so on, many of which continued to be used in political movements after the establishment of the PRC. Here, the author offers a glimpse of how the “new people” formed, based on abundant primary materials. Then he analyzes the operational mechanisms of the Yan’an Rectification Movement, which were closely related to the rectification organization of the CCP, Mao Zedong’s masterful operation. A new Mao-style discourse formed the foundation of Mao’s authority, which greatly influenced the development and direction of Chinese communism.

The fourth part covers some of the monumental political movements of the early PRC period, such as the Great Leap Forward (“The Great Leap Forward and the Expansion of State Power: Taking Jiangsu Province as an Example”), the Anti-Rightist Campaign (“Can we speak, Dingling?”) and the origin of the Cultural Revolution (“Reading Mao’s Poem Qi Lü: You Suo Si”). There is an interesting little story regarding Gao Hua’s article on Yang Shangkun’s diary that showcases Gao’s impressive research ability. Yang Shangkun used to be the director of the General Office of the CCP Central Committee in the 1950s, and Gao wrote this article after reading his diary and other historical materials. One of Yang’s sons was very surprised that Gao knew so much about his father, and visited the author to ask how he had learned so much. The author replied that he had never talked with Yang or his relatives or friends, and wrote the paper entirely on the basis of his diary. This anecdote demonstrates Gao’s amazing ability to read and analyze historical materials.

The fifth part, “Observation and Historical Materials,” presents the author’s thoughts on the history of the newly-established PRC and its historical materials. In “Take Little People, Big History (Xiao Renwu, Da Lishi) as an Example,” the author investigated how the young PRC governed and managed society through an analysis of the private documents of fifteen ordinary individuals (the so-called “little people”). The approach was new and the materials were unique, as were the conclusions. Moreover, the article conveyed the author’s belief that history is the study of human beings and that the scholar should care about ordinary people, not only heroes and leaders.