The Rights Protection Movement and the State in Contemporary China 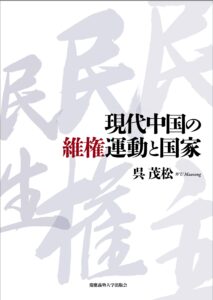 The existing literature uses theories of civil society and corporatism to analyze state-society relations in China after the introduction of economic reforms. It tends to conclude that the state still has a predominant position in society. But this finding is partly a result of the authors focusing on institutions and organizations established by the state and overlooking how people’s behavior in society influences policy-making. Correcting this shortcoming of previous studies, Wu Maosong’s book discusses the rights protection movement (weiquan yundong 维权运动).

The term “rights protection movement” refers to people who demand the fulfillment of rights and request reimbursement when their rights are infringed upon. These movements appeared in the 1990s because people gave priority to individual benefit after the opening and reform policies, which had first started in the late 1970s and were institutionalized in 1980s. The book choses several cases after 1990s, such as the consumer movement, the labor movement and the proprietor movement, to analyze how citizens become involved in the rights protection movement. Based on the case studies, the book also analyzes how the movement influenced policies of the Chinese Communist Party. The book presents two main findings. First, the rights protection movement is a step on the way to a broader social and democratic movement and it is also good practice for people to understand what democracy is. Second, citizens are prepared for democratization, but predictions about future attitudes of the state are hard to make. In short, the book examines the possibility of democratization in China by focusing on the rights protection movement.

The book stands out for the superior quality of its fieldwork. The author not only gathered rare materials in the field from citizen participants in the movement, but also interviewed government officials. While studies of contemporary Chinese politics in Japan tend to prefer research based on written documents, the author uses a different qualitative approach, including interviews and ethnography in the field. Moreover, the book is noticeable for theorizing the rights protection movement. The movement is in a state of flux, so that it is challenging to analyze it academically. Wu Maosong uses collective action theory to demonstrate how the rights protection movement morphs into a social movement.

As for shortcomings, there might be a case selection bias. It is unclear how the author chose his five cases. Apparently, the author chose “influential” cases, but these cases may not be representative of Chinese society as a whole: Presumably they are “influential” precisely because they are special. In order to evaluate the possibility of democratization in China, the author would have needed to justify how these special cases represent general circumstances in China. Relatedly, the connection between democratization and rights protection is tenuous. The author points out that the rights protection movement has certain characteristics of a social movement. But are the people who participate in these movements representative of Chinese society? Analyzing how the rights protection movement influenced society would have helped readers to accept the author’s argument.

Overall however, this book makes an important contribution, advancing our knowledge of how people seek to protect their rights, and how their claims transform the politics of China. The book is among the most illuminating studies on contemporary Chinese politics carried out by scholars in Japan.