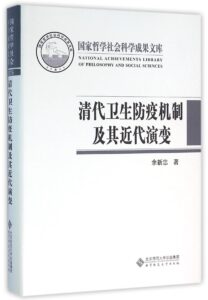 In modern China, weisheng (sanitation/hygiene) is a word with great significance in everyday life. It is viewed as not just a personal habit, but also a criterion for modernity and China’s place in the world. In the last few years, Professor Yu Xinzhong has devoted himself to the study of the history of hygiene. Compiled from his latest research, this book traces the transformation of views on sanitation and related practices in the Qing dynasty.

The book has eight chapters (not including the introduction and conclusion) and three papers as appendices. The first chapter discusses how the concept of weisheng shifted from a meaning of “guarding life” to a meaning of hygiene/sanitation in the late Qing. The author points out that rather than being simply borrowed from Japan, as other modern terms were, weisheng had multiple origins. Its conceptual evolution began in Guangxu’s reign (1875-1908) along with the introduction of Western sanitary knowledge, and it was largely promoted after the First Sino-Japanese War (1895) when the Chinese were anxious to learn from Japan and improve sanitation; the transformation was finally normalized as the state’s sanitary administration was established in 1905. For a long time, the traditional meaning of weisheng coexisted with the modern meanings.

Chapter 2 traces the change in Chinese responses to epidemics in the Qing dynasty. Yu shows that the priority shifted from escape and healing to prevention, which includes cleanliness, quarantine, and sterilization. The former was primarily passive individual behavior while the latter demanded more initiative and was encompassed by the state power. Yu also strongly suggests that traditional ideas on epidemics were not naturally opposed to modern ones.

In Chapter 3 Yu further explores the evolution of sanitary institutions and policies in Qing. The author shows that, though the early Qing already had policies on street cleaning, waterway drainage and corpse disposal, effective institutional supervision did not exist until the late Qing. The establishment of sanitary administration in the late Qing was not only a result of the influence of foreign countries and but also an extension of traditional sanitary ideas and practices. With a distinct mark of Japanese influence, the modern sanitary administration built in the late Qing put epidemic prevention at its center and was uneven across the country.

In chapter 4, the focus shifts to urban water quality in the Qing. Yu proposes that, though many of the main rivers were turbid, their water quality was not bad. After the mid-Qing, pollution in certain sections of urban waterways was more serious mainly due to the soaring population and the household waste it produced rather than industrial pollution. However, once the river was dredged, the problem was relieved. Besides, the traditional method of night soil disposal had largely kept human excrement from polluting the river. Because of the lack of effective drainage systems, dirty water could always be found in urban areas. However, it only happened in certain times and places, and it is still hard to evaluate its impact on health. Chapter 5 surveys the modernization of night soil disposal. In traditional China, mainly as an agricultural and economic issue, night soil disposal was oriented by the society and market, though not effectively.

Chapter 6 discusses how modern Chinese views and practices on cleanliness were formed. Associated with multiple meanings in traditional times, the term qingjie was used more frequently and refers exclusively to cleanliness/cleaning in modern China. Though ancient Chinese had recognized that cleanliness was related to the burst of epidemics, cleaning was not taken as an important countermeasure to epidemics until the modern era. As it transformed from a personal choice to a public affair implemented by state administration, cleaning was taken as indicative of national character and strength, as well as the extent of civilization and modernization. At the same time, in the name of science and modernity, the state reinforced control over both the finances and the bodies of its citizens.

Chapter 7 examines the introduction of quarantine in the late Qing and the power relationship in it. After the First Opium War, quarantine was introduced into China along with modern sanitary ideas by Western colonizers. Though many Qing officers and gentry elites had doubts on some specific practices of quarantine, most of them saw quarantine as an advanced modern measure and a battlefield for sovereignty. In contrast, the popular mass was afraid and resistant to quarantine. The implementation of quarantine involved a complicated power relationship and conflict of interest among foreign countries and China as well as among different social classes and groups. In the name of sanitation and modernization, the rights and freedoms of the underprivileged were sacrificed to protect the interests of the privileged.

In Chapter 8, the author further investigates how the state realized its control over its people through sanitary administration and how the Chinese accepted it. In Yu’s view, the late Qing witnessed the beginning of the birth of the modern Chinese body, which was disciplined by the hegemony of sanitary discourse as well as sanitary policies and institutions. Under the influence of and pressure from “advanced” foreign countries, Chinese elites embraced sanitation with enthusiasm to realize the modernization of the state. In this process, the freedom of people was sacrificed and state power was expanded.

Yu’s work makes several contributions to the historical literature on hygiene. As he mentions, at present most research on hygiene mainly focuses on the Republican period, not the Qing. Focusing on the latter allows him to trace the transformation from tradition to modernity, and also to show the continuity of Chinese sanitary history. Yu strongly suggests that, although the influence of the West and Japan was the main reason for hygienic modernization, we should also pay attention to the contribution of Chinese tradition and Chinese society itself, which is the most remarkable insight of the book. Yu points out that the traditional ideas on epidemics and cleaning were not necessarily opposed to the modern ones. Instead, some of them were assimilated into Chinese modern discourse on hygiene and helped Chinese people to understand and receive modern views on sanitation as well as to take corresponding measures. For example, traditional knowledge of the preservation of life was absorbed into the modern hygienic discourse, and germ theory was received by Chinese through the traditional idea of yiqi (疫气). In addition, the author also challenges our previous imagination on tradition as immobile and backward. He argues that what we tag as traditional was often new in the Ming-Qing period. Therefore, we should realize that traditional society also had its own modernity.

Yu proposes that the most distinct transformation of sanitation in the late Qing was political and administrative.  As he shows, hygiene changed from a personal affair to a political issue of public health. Hygiene was endowed with great importance as it was taken as indicative of national character and strength, as well as the extent of civilization and modernization. In the late Qing, hygiene was put under the rigid administration of the state with specific staff and institutions. Yu believes that this period laid an important foundation for the future development of hygiene.

The book also has its defects, the biggest being that because it is compiled from different independent essays, the chapters are not always well-integrated, and some issues are addressed repetitively in different parts of the book.