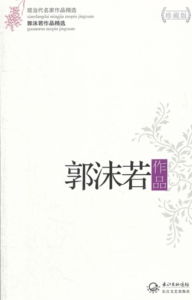 Guo Moruo is a well-known poet, historian, archaeologist and government official of 20th century China. This book is a compilation of some of his works, and is divided into four sections comprising: poems, autobiography, short stories, and a play.

The biography consists of two parts: ‘My Childhood’ and ‘Ten years of Composition’.  Guo Moruo mentions that this biography is written just to document the life of a person (himself) who witnessed the transition from imperial phase to capitalist phase in China. Most of his poetry reflects his own hopes, aspirations, and admiration of natural beauty. It also illustrates his efforts to establish a new and better China, his expression of melancholy and his love for the motherland. Guo feels entangled by traditional Chinese thought, family structure (filial piety) and arranged marriage. His compositions depict his aspiration to liberate society and thereby himself from these orthodox traditions and structures. In his famous work titled ‘The Nirvana of Feng Huang (Phoenix)’, Guo Moruo emphasizes that new society can only be created after the old one is burnt to ashes.

Most of his poetry is free verse which represents a change in the field of Chinese literature, which occurred as a result of Bai Hua Yundong (New Literature Movement). This movement focussed on the use of language which is known and spoken by the common people, and was contrary to the pre-existing rigid and complex language used by government officials. Guo seems to be influenced so much by this movement that he does not shy away even from using English words in his Chinese poems.

In the play Qu Yuan, Guo uses a historical analogy of the patriotic poet Qu Yuan to portray his love for country and to express his inability to bring desirable and positive changes, despite his intellectual capabilities. In his biography, he claims that he envisions Qu Yuan within himself. Most of the short stories also seem to be of his own life experiences, where the protagonist has a striking resemblance to his own self.

Guo Moruo’s early education, which he received at home, comprised of classical Chinese literature. His mother, who was not well educated, taught him Tang-era poetry. The early childhood knowledge of literature is visible in Guo’s works in the form of historical plots and characters. Guo, with his unbridled temperament, was a voracious reader who read a lot of foreign literature, including western and Asian authors, such as Goethe, Tolstoy, Walt Whitman, Spinoza, Rabindranath Tagore, and many more. These authors are also mentioned in his compositions in this book. Guo also mentions the famous Indian poet Kabir in one of his poems. In the biography, he says that there was a time when he almost gave up on literature and then he came across the works of the Indian Nobel Laureate, which restored his faith in it and motivated him to pursue literature further.

This book is a reflection of the author’s own self, and his reactions towards the socio-economic and socio-political changes that were taking place during the early 20th century. These changes included the abolition of the Imperial Examination System, the overthrow of the Qing government (Xinhai Revolution), the May Fourth Movement, etc. This book can thus help readers to understand the societal structure and issues that prevailed in early 20th century China.