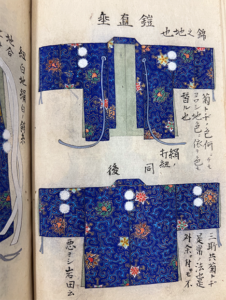 This mid-Edo period, five-volume manuscript entitled Shōzoku shūyō shō (裝束集要鈔) contains textual entries and painted illustrations detailing garments and accessories used by members of the imperial court. For some entries, a variety of perspectives, ink renderings of patterns, or even construction guides are included. The manuscript covers the clothing not only of emperors and other members of the imperial family like the crown prince, but also of lower-ranked male aristocrats and even imperial guardsmen. Alongside comprehensive, encyclopedic entries on each type of garment, the anonymous author also includes their own annotations in red ink.

Each textual entry largely paraphrases or quotes from earlier sources such as the 1614 Shōzoku shūyō shō (装束拾要抄), the 1692 Shōzoku zushiki (装束図式), and the 1716 Shōzoku yōryō shō (装束要領抄), while the base illustrations seem to be drawn from two main sources: simple line renderings from the above-mentioned Shōzoku zushiki or black and white illustrations in Yuuki Hidenobu’s (1750-1803) Ifuku benran (衣服便覧). The manuscript’s creator likely selected colors for their illustrations based on annotations found in these prior works.

Accompanying some of the color illustrations are indications of prescribed materials, dimensions, or patterns. The materials employed in the making of the manuscript are eye-catching, from the vibrant pigments and precious metals employed to the mica-hewn dragons and finely-brushed seasonal flowers on the outer and inner covers of each volume.

This manuscript falls within a genre known as yūsoku kojitsu (有職故実), the study of the customs and manners of the ancient and medieval imperial court or warrior clans. While yūsoku (“learned or cultured [person]”) kojitsu (“ancient customs”) used to refer only to the imperial court, by the medieval period it encompassed warrior class customs as well. For example, shogunal retainer Ise Sadatake (伊勢貞丈) (1718-1784) wrote extensively in this genre around the same time that this manuscript was produced. The Harvard Art Museums holds woodblock prints of his seven-volume Gunyōki (軍用記) on arms and armaments as well as his Hōketsu zu setsu (包結図説) on wrapping and knot-tying.

Below: An assortment of ceremonial and everyday robes for members of the imperial family and court, as well as crowns, sashes, fans, ceremonial swords, decorative quivers, court hats known as eboshi, and other details like multi-colored decorative knots as seen in the illustrations of the shōzoku shūyō shō 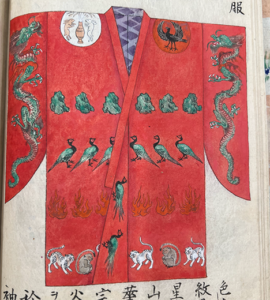 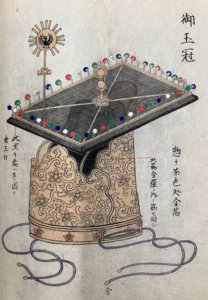 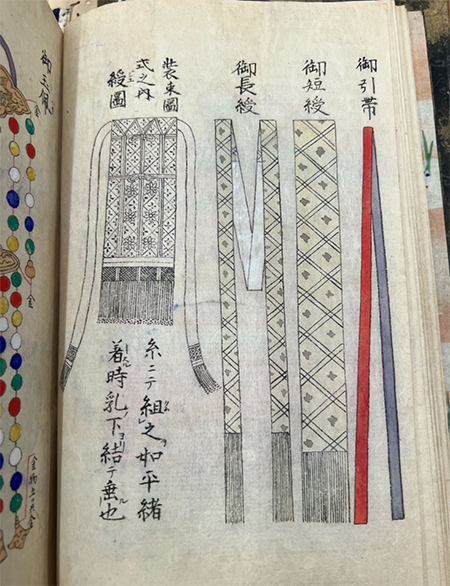 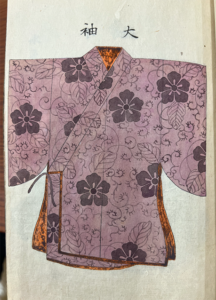 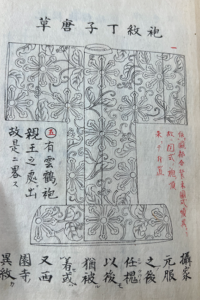 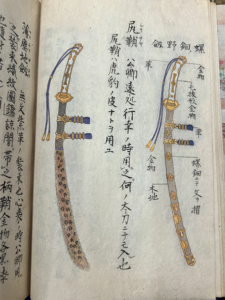 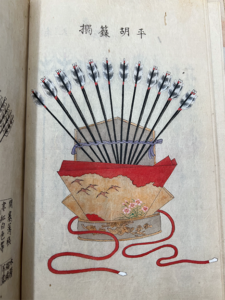 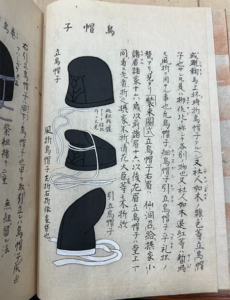 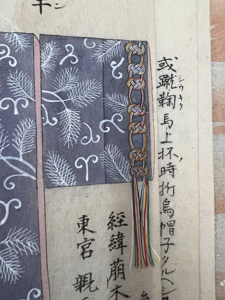 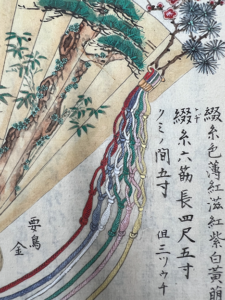