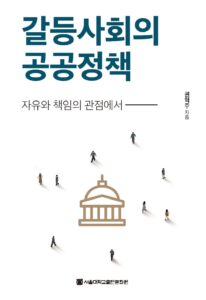 About the book: The book examines controversial public policies of the Korean government, which became an epicenters of social conflict, such as universal basic income, public pension reform and nuclear power phase-out policies. The book draws on the literature of normative political theories as well as political economy of public policies. It also proposes right ways of public policy making, which can strengthen sustainability of the Korean democracy.

About the author: Kwon Huck-ju was a HYI Visiting Scholar from 2013-14.