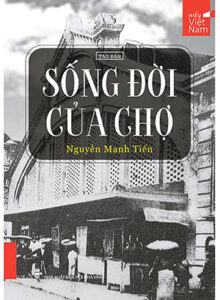 Nguyen Manh Tien studies “the market” – a subject that is full of life, helps to support the livelihood of families and allows people to have a place to socialize as well as to preserve culture. Although they play an important role in life, marketplaces are considered by Confucianism in Vietnam as shabby, dirty and not for men. This paradox is clarified by the author in three parts of the study: (1) entering the market, (2) markets in the functional structure of villages, and (3) about the markets, which are described vividly to see how “markets” are able to persist over time.

In part 1, the author describes the traditional (village) market, which is held periodically and where goods are circulated to meet the needs of human life. The market welcomes everybody: in the morning or afternoon session, whoever has something to sell sells it there, in both professional and non-professional ways. Women are present at the market as both the sellers and the buyers, as well as a source of sounds that create different emotions in the market. The market is the economy and the culture that paints diverse colors to its solid embodiment – the marketplace. Markets from the highlands to the lowlands are classified by directions, presence of relics, administrative and spiritual areas; as well as scale, events and phenomenon. The Vietnamese market is a component of regional “identity” where kinship and trust are expressed. In part 2, the author analyzes “markets” in the functional structure of villages, where economic factors are gathered and made into a trading network consisting of both small and large merchants. The market turns the poor into well-off people, then to petty bourgeois and finally to bourgeoisies – the social class that has repeatedly changed the fate of Vietnam – but it is seen with contempt by Confucian discourse, which places them at the bottom of the social ladder: “scholars, farmers, craftsmen, merchants.” Even Marxist sociology once also exalted proletarians who worked hard to build a communist society, and despised merchants and traders, believing that “trading” is to blame for all sins. It is time to “deconstruct” our thinking and ideology to have a new look on trading and markets in contemporary society. The market helps to expand the space, from small markets to large ones like Ke Cho – Thang Long (Hanoi). The market is a woman-based trade, a noisy place for buying and selling things, bargaining and gossiping. Markets are connected in a dense network, where women act as the keepers of traditional Vietnamese culture through generations. Women are disadvantaged as they are prevented from education by Confucian barriers, but they excel in trading at the market to feed their families. Both women of humble origins and wives of high-ranking officials join this huge trade network. In addition, village markets are also where the punishment of state law is carried out to suppress rebellion, which is seen through the “beheading scene” at the market. Simply, the market is an information network, where the wave of public opinion shapes the crowd psychology in villages, which is regulated by “underlying institutions.” The market is also a cultural space for village festivals and for the preservation of folk arts. In part 3, About the Market, the author believes that the markets in villages are an identification of Vietnamese people living in the delta, which helps to distinguish them from other ethnic groups in the midlands and highlands. Most importantly, the discourse of the “elite” class cannot eliminate the dynamics of the market and the contribution of trading activities in Vietnamese culture and history.

Through ethnographic fieldwork, the author tries to reconstruct the image of the village market in the Northern and Central regions, and presents his personal interpretation to clarify its liveliness throughout history. The success of the book comes from an ethnographer’s observation-based interpretation of the village market at its lowest level, which shows the values of cultural identity and a solid foundation of Vietnamese society. This book is a vivid picture of the life of the Vietnamese market in complete contrast to Western-style supermarkets.