Songcun Village: Authority and Discipline in a Time of Radical Change 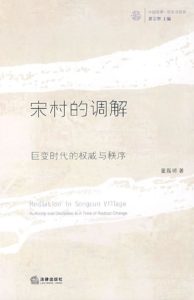 Since the 1990s, the case of the rural petitioner in China has captured the attention of scholars of contentious politics and China Studies. In an expression of their rights consciousness, Chinese rural peasants have been confronting local government, answering the state’s call of legal mobilization. In this book, Dong Leiming documents the vivid stories of dispute mediation amongst ordinary peasants in Song Village (Songcun), revealing the growing vacuum of state power in rural China.

Dong argues that the mobilizing ability at Songcun is weakening. The spread of new individual-centric lifestyles in rural areas has caused peasants to become more isolated from one another and less interdependent. They have become gradually detached from their collective lives of the past. For instance, the provision of public goods used to be dependent on the collective mobilization of young male laborers in rural villages, but nowadays local village cadres have limited mobilizing power. Without monetary incentives, the peasants no longer answer cadres’ calls to mobilize, and consider such tasks to be the responsibility of the cadres themselves. As a result, providing public goods has become a problem.

Dong also identifies three channels through which to mediate the social and economic conflicts at Songcun. The first relies on the power of the family. In Songcun, families bearing the same surname often live in the same area. Those with familial authority within villages play an important role to mediate conflicts among various big families. Second, in some social conflicts, an organized gang is recruited to settle disputes. With the weakening of state power at the grassroots level, villages sometimes rely on these gangs to demonstrate strength and threaten others. The third channel is through the actual state authorities, such as the village cadres, to settle economic and family disputes. The mobilizing of the law, even with conflicting values amongst villages, has largely been welcomed. It has helped to eliminate gang power in villages by occasionally regulating such illegal behavior.

This book provides an in-depth view into the lives Songcun peasants and touches upon several important topics in studies of rural China, ranging from mobilization to civil dispute mediation. Dong argues that legal mobilization in rural China nowadays meets peasants’ demands to regulate their lives and mediate their disputes. It signals that the traditional channel (through social gentry and spontaneous power) is weakening in a changing society. However, the theoretical connections between legal mobilization and stability in rural China are not proven. It is never quite clear whether legal mobilization is diminishing the role of gang power or rebuilding the state power at the rural level. There has also been much empirical evidence that legal mobilization has bred instability at the grassroots level. The instrumental use of the force of law to rebuild the state’s power at the grassroots level might also encounter unexpected results, as it ignores the political and social development necessary to address the root causes of problems in rural China. Yet, anyone interested in China may find this book interesting for a deeper dive into the changing society in rural China.