Soviet Influence and Chinese Films Produced during the ‘17-year’ Period 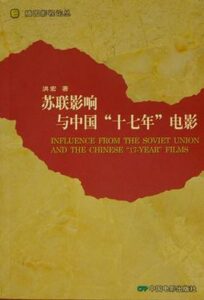 Spread over 244 pages and carefully divided into eight chapters, this book is a detailed inquiry into the influence of the Soviet Union on the films of China produced between 1949 to 1966, often referred to as the “17 year” period. After 1949, when China as a new born People’s Republic was looking towards its big brother, the Soviet Union, for guidance in every aspect of nation building, it is no surprise that art and literature too was influenced by the Soviet model. Mao Zedong’s 1942 Talks at the Yan’an Forum on Literature and Art had already declared that the role of art and literature is to serve politics and their loyalty is primarily towards workers, farmers and soldiers. These thoughts, further combined with Soviet Socialist Realism and Zhdanovism, gave shape to the “17 year” films of the new China.

By incorporating the methodologies of comparative study and influence study, Hong Hong through this book has tried to fill a void which long existed in the historiology of Chinese films. A re-evaluation of the “17 year” films as an academic discourse started gaining currency in the eighties. However, a thorough study of how the Soviet Union played a crucial role in shaping filmmaking process, film theory, film genres, film scripts, adaptation of revolutionary history for the screen, creation of characters both positive and negative, adaptation of literary works, screen aesthetics and last but not least, the politics behind all of it, has not yet been done before this book.

In doing so, the book looks into the history of development of Soviet films and how the formalism of earlier Soviet films was forced to give way to the socialist realism of the Stalin era, and how the “17 year” films held the flag of this socialist realism high. Apart from the very brief period of the Hundred Flowers campaign, when satirical comedies like Before the New Director Arrives and The Unfinished Comedy tried using films as a mirror to society, Chinese films were mainly busy eulogising the party, class struggle and the present while denouncing the past. Hence, a film like The Life of Wu Xun, which propagated benevolent feudalism, had no place in new China where films were supposed to be in conformity with the Party’s character (党性). Satire had no place in new China, because there is nothing in a socialist society which invites sarcasm. The book explicates how these ideas were influenced by Soviet ideals of a socialist society.

The details of infatuation with the Soviet model of cinema, to be more accurate with the Stalinist model of cinema, may make the reader feel claustrophobic at times and make him/her grasp for an answer to an important question: in its course of imagining the new nation, why did the “17 year” films become so enamoured with the idea of irrigating the saplings of communism with water from the Volga that they completely overlooked the Yangtze? Simply put, why didn’t these films look towards the magnificent Shanghai films of the thirties and forties to help the new China grow? While the book for most part engages itself with the Soviet influence, it does try to answer this question by putting forward the argument that Shanghai films were seen as a product of capitalism, hence were met with disdain. In other words the Yangtze carried bourgeois water while the Volga carried proletarian water.

This book delves deeply into the evolution of the “17 year” films and is a must read for those who seek to understand the politics of the evolution of art and literature in general and films in particular in Mao-era China.