Studies about Paintings on Folding Screens in the Japanese Middle Ages 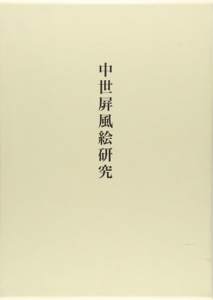 This book discusses large paintings, such as folding screens (屛風) and shoji-e (障子絵), that were painted during the medieval period (12th-16th century) in Japan. There are few existing examples of such paintings from this period, thus it is difficult to add new discoveries, and the same explanation has been repeatedly cited. However, Izumi Mari in her work Studies about Paintings on Folding Screens in the Japanese Middle Ages presents many new opinions by using historical materials and examining the details of paintings—     such as the dates of creation, the painters, the meanings of paintings, and the connections of paintings to other works. The content is the study of individual works. The works discussed in this book are as follows: the Jingoji Temple (神護寺) landscape screen, landscape screen owned by Kongobuji Temple (金剛峯寺), the Mount-Koya landscape screen owned by the Kyoto National Museum, the shoji-e in the reliquary hall of Horyu-ji Temple (法隆寺) , the sketch copy of the shrine festivals of the twelve months (月次祭礼図模本), the picture scroll of festivals (祭礼草紙) owned by Maeda Ikutokukai (前田育徳会), the picture scroll of festivals previously owned by Akaboshi family, the picture scroll depicting the stories about Mibujizo (壬生地蔵), the screen of a pine grove scene by the seashore owned by the Tokyo National Museum, and the screen of a horse race scene owned by Kasuga shrine (春日大社). It is extremely difficult to summarize the discussion of each work here, so I will introduce the shoji-e in the reliquary hall of Horyu-ji Temple as an example.

The shoji-e in the reliquary hall of the Horyu-ji Temple is attributed to the works by ebusshi (絵仏師: priest painter of Buddhist images) around 1360. It was originally placed at the reliquary hall of the Horyu-ji Temple, but then was removed and renovated to the form of a holding screen in the Edo period (1603–1868). It is now owned by the Tokyo National Museum [Figure]. It has been explained for a long time that this shoji-e depicts the Chinese historical events “Shangshan sihao (商山四晧 Four elderly sages on Mt. Shang),” and “King Wen and Lu Shang (文王呂尚).” However, the author questions the fact that the two subjects on this shoji-e are different from the later paintings of the same subjects, then discusses why these subjects and unique designs were chosen here in the Horyu-ji Temple. “King Wen and Lu Shang” usually depicts the scene of their meeting, but in this painting, the scene of their journey to the capital was chosen. As for “Shangshan sihao,” it often depicts the scene where people enjoy retirement or visit the imperial palace, but in this painting, it is not clear. There are more than four “elderly sages”  and they don’t all look elderly. The author explains this ambiguity by citing the situation at that time when famous and unknown hermits were both used without distinction as a symbol of a quiet life. According to the author, the reason why Chinese historical events were selected was because they were related to the public entertainment performed at Horyu-ji Temple and the other temples around Nara. Many of the performing programs were based on ancient Japanese tales, including the tale of prince Shotoku, and Chinese historical events, which were well known to everyone. As for the painting style, the author insisted that although paintings on Chinese subjects were usually drawn in the style of Yamato-e (大和絵: traditional Japanese painting style) in Japan at that time, some elements of this painting deviated from that tradition. There are elements of Chinese Sung and Yuan paintings and coloring techniques similar to those of Buddhist paintings.

Due to the uniqueness of this shoji-e, it is still difficult to find definitive answers. However, it is significant that the author questioned the uniqueness of this painting and clarified the differences in other works based on the existing historical materials and the situation in Horyu-ji Temple at that time.