Studies on the Beliefs of Local Shrines in Song China 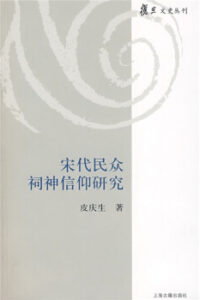 Over the last two decades, the study of popular religion in the Song dynasty has been one of the most flourishing areas of Chinese historical research. The works of Valerie Hansen, Terry Kleeman, Richard Von Glahn and Robert Hymes are all important writings in this field that have deepened our understanding of Song Society. Pi Qingsheng’s book sheds new light on this important field.

The book consists of seven chapters (including an introduction and a conclusion). Chapter one presents an outline of the main concepts, the structure, and the basic perspective of the book, in addition to an evaluation of previous studies. Chapter two is a case study of the cult of God Zhangwang 张王 (King Zhang), a very popular and important deity in South China, especially in the lower Yangtse delta. Chapter three focuses on the religious convocations in Song society as a general feature of local cults. The fourth chapter discusses different ways of praying for rain in the Song. Chapter five discusses the spread of beliefs among local shrines. In this chapter, the author analyzes the dissemination of these beliefs, and the distribution of the sub-shrines of certain deities such as the God Wutung五通, Yang-shan 仰山, Tian Fei天妃, and the Divine Lord of Zitong梓潼. Chapter six studies the legitimation of local cults in Song China. The conclusion discusses different attitudes of officials, local scholars, and religious practitioners such as Buddhist and Taoist monks toward the local cults.

The research is based on rare and important Chinese materials. A rare book entitled 祠山事要指掌集(Corpus of the stories of Cishan) which is preserved only in the National Library of China plays an extremely important role in his study. Many stone inscriptions, official proclamations, miraculous stories, and ritual records collected in this book provided details of the cult to God Zhangwang in the Guangde 广德region.

This book emphasizes the role of the local cults against the background of the Tang-Song transformation. Pi pays much attention to the functions of local elites in the process of standardizing and spreading of local cults. As to the relationship between merchants and the local gods, Pi points out that the cults to local gods could actually promote trade rather than merely reflect it. The author makes an important contribution in interpreting the world of popular beliefs in Song China from the perspective of intellectual history.