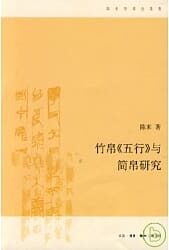 In addition to the silk versions unearthed in the 1970s, more and more texts of Confucianism inscribed on bamboo slips, produced roughly between 400-300 BCE and not seen since the Warring States period in Chinese history, have been discovered since the 1990s. These excavated texts are reshaping the intellectual landscape of pre-Qin China. On the one hand, studies on these brand new materials already constitute a “hot topic”, which has attracted many scholars in Chinese studies around the world. On the other, most studies on these materials are still limited to philology. Although some materials, for example those kept in the Shanghai Museum, are still unpublished, a philosophical approach to the materials should also be promoted. Chen Lai’s new book, Study on Bamboo and Silk Versions of Wuxing and Other Newly Unearthed Confucian Texts is precisely a philosophical interpretation of those newly excavated Confucian texts, particularly the bamboo and silk versions of the Wuxing五行.

This book includes Chen Lai’s 12 articles. Besides the first article which provides an introduction to the significance of the newly unearthed Confucian texts, the main body of the book, as the title suggests, is a study on the Wuxing, which includes four articles on the bamboo and silk versions of the Wuxing. Although based on previous scholarship, Chen’s study on the Wuxing seems strikingly original in its philosophical perspective and is an important contribution to the study of pre-Qin Confucianism.

First, as we know, the thought of Zisi子思 has almost never been successfully tackled due to the problems of establishing authentic authorship. With the discovery of the Wuxing, however, Zisi’s authorship, mentioned in ancient historical records but severely questioned by modern scholars, was finally established. Chen Lai then offers a comprehensive philosophical interpretation of Zisi’s thought, particularly as it concerns sheng聖 and zhi智.

Secondly, Chen Lai reasonably argues that the explanatory part of the silk version of the Wuxing was very possibly written by Mengzi孟子 himself during his middle age as one of the students of Zisi. Further, to reinforce his argument, Chen Lai made a study of the relationship between that part and the Mengzi, revealing the strong continuity and resonance between them. The critique by Xunzi荀子 to the thought of the Wuxing, “it was Zisi who advocated this thought and Mengzi who made it resonate,” according to Chen Lai, then can be properly understood.

Besides the clear and convincing interpretation, following traditional Chinese scholarship, Chen Lai tries not only to separate the silk version of the Wuxing into two parts, the main body by Zisi and its commentary by Mengzi, but also to make his own commentaries on these two parts. Of course, as he says in a corresponding article, his commentary, which intends to elucidate the coherent meaning of the text, is philosophical rather than philological.

In short, Chen Lai’s new book focusing on the Wuxing represents the newest philosophical study of the so-called “simeng xuepai思孟學派”(the school of Zisi and Mengzi). It will no doubt advance the scholarship of pre-Qin Confucianism.

By coincidence, the four articles on the Wuxing in this book were exactly completed during the author’s visit at HYI from 2006 to 2007. For this reason, it seems especially appropriate to introduce this new contribution to Chinese scholarship in a journal sponsored by HYI.