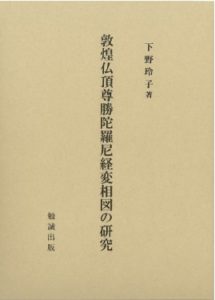 The Uṣṇīṣavijayā Dhāraṇī Sūtra (佛顶尊胜陀罗尼经, UVDS) was well-spread in the history of East Asia. In the process of dissemination, this sūtra became the textural basis for numerous works of art, especially in Dunhuang Mogaoku, Tangut Khara Khoto, and Hangzhou Feilaifeng. Regarding the art, previous and current research can be classified into four aspects: (1) the study on columns and inscriptions of UVDS, (2) the study on UVDS Mandala, (3) the iconographic study of the Goddess Uṣṇīṣavijayā, and (4) the study on UVDS Scenes in Mogao Caves. Especially in the last aspect, there has been much academic discussion over the last several years.

For the purpose of academic discussion, it is appropriate to regard the interpretation about the scenes on the Southern Wall of Mogao Cave 217 as the beginning. During this long period of time, the scene was commonly considered to be from the Lotus Sūtra (妙法莲华经). Since 2004, Akiko Shimono has published several articles attempting to analyze and examine these suspicious wall and the ceiling murals of which the textural basis should be UVDS, including Caves 217, 103, 23, and 31. After this viewpoint was raised, a group of scholars—all with different viewpoints either supporting UVDS or Lotus Sūtra as the textual basis—participated in the discussion. Moreover, for Akiko Shimono, this discussion has become one of the key components in her doctoral dissertation, with this monograph as a revised and extended version of her doctoral dissertation.

Based on this academic discussion, in order to examine the textual basis of whether the wall and ceiling murals are from UVDS rather than the Lotus Sūtra, two aspects should be analyzed. The first is a comparison between the mural images and UVDS texts, while the other is examining the pattern of manifestation of Lotus Sūtra in Mogao Caves. These aspects constitute two sections of the whole monograph.

The first section is UVDS Scenes in Tang Dynasty Mogao Caves and their Textual Basis. This section is separated into six chapters. Chapters 1 and 2 are focused on the scenes depicted in Caves 217 (southern wall), 103 (southern wall), 23 (eastern surface of the ceiling), and 31 (eastern surface of the ceiling to the ends of northern and the southern surfaces), which should be based on the version of UVDS translated at the end of the 7th century by Buddhapāli. For Cave 217, the author particularly points out that the scenes of the western section of the wall were from the first half of the introduction of Buddhapāli’s translation (T.967). Regarding the other three works, the author focused on the development of UVDS scenes. As the conclusion did for Caves 103 & 23— although those either exclude scenes from the introduction, or more abbreviated in content— the two caves belong to the same iconographic tradition together with Cave 217. On the contrary, Cave 31 belongs to a different tradition which may be influenced by esoteric rite of worship.

Chapter 3 (“Portraits of Worshippers in Cave 217 and their Dating”) can be regarded as a transition part. Based on previous studies, the author points out that another layer exists under the present portraits of the worshippers. Thus the author gives further consideration to the possibility that the portraits of the original worshippers were painted on the layer underneath when the cave was constructed. Depending on the comparison of hairstyle, garments and physical features of the iconography, the author concludes that it is impossible for the colophon to belong to the worshippers dating back to the construction of cave.

Chapter 4, and to a certain extent Chapter 3, is more like a philology study than an art history one, as it mainly concentrates on the actual situation about UVDS. Chapter 4 focuses on the issue of when different translated versions of UVDS appeared and the introduction was created. As the conclusion of this chapter, Buddhapāli’s version was translated after Du Xingyi (杜行顗) and Divākara’s first translation, most likely during the second year of Yongchun永淳(683). Furthermore, the introduction of UVDS was written by someone long after August of the first year of Yongchang永昌(689), and was added to the sūtra together with the dhāraṇī revised by zhijing志静. Chapter 5 (UVDS during the First Half of Tang Dynasty and Japan’s Nara Period) explains that depending on the analysis of the correlation in different versions, at least two types of dhāraṇī had spread in different parts of the empire during the reign of Wu Zetian. Furthermore, as the introduction in the Buddhapāli version, a revised dhāraṇī was “translated separately at the end” (“最后别翻”). There is only one existing example supporting this mode, the transcription in the Shochiin (正智院), Koyasan, dated 11th year of Tenpyo天平(739). It is suggested that this transcription maintained the closest form to the Buddhapāli translation, and was the most legitimate transcription remaining to date. In Chapter 6 (“the Development of the Buddhapāli Translation in the Printed Tripitakas”), as the dhāraṇī was revised repeatedly in the pursuit for precision, the author examines the UVDS text history in Printed Tripitakas.

The second section is a study on the Lotus Sūtra scenes in Dunhuang, including three periods: Sui, High Tang, and the periods after the Tubo occupation. Chapter 1, concentrated on the Mogao Cave 420, which was painted during the Sui and represented the earliest remaining example of this type. Based on existing studies and analysis, the author declares that the western and northern murals should be regarded as scenes from the Mahāparinirvāṇa-sūtra rather than the Lotus Sūtra. In Chapter 2, focused on Lotus Sūtra scenes in Cave 23, the author concludes that this cave can be seen as pioneering the traits of the works after the Tubo reign, as some stylized Lotus Sūtra scenes can trace their prototypes back to the High Tang. In the last chapter, depending on the 12 works of Lotus Sūtra scenes, some development in iconography and composition can be found in those works, even in the stylized trend after the Tubo reign.

This monograph may be regarded as a conclusion to the academic discussion during the past period of time. In order to exceed traditional consideration, the normal way is either to adapt some new research methods or introduce new archeological materials. Although generally speaking, new research methods or materials is something of a lottery, it doesn’t mean that the research has no means to improve. For this monograph, the true situation can be approached through a careful reading both in iconography and philology. In order to do this, the division and match work should be done separately. For this reason, some discussion about the research methods on both sides should be pointed out. For example, as in Chapter 3, because of the discovered layer underneath, there are multiple possibilities in the interpretation about the history of the cave. This implies that one should be careful in determining the date of a Cave based on the colophon.

As an epilogue, there is one point with which to contest. With the process of UVDS, the version of this sūtra can be found in Chinese, Tibetan, Sanskrit, Pali etc. Although the author paid much attention to the Chinese versions, some versions written in other languages also require discussion—for example, the Sanskrit manuscripts discovered in Horyuji, MIHO Museum, etc. By examining those materials, the situation of UVDS will be more clearly revealed. With these multilingual materials, it may also inspire the other three research aspects which are mentioned at the beginning of the article.