A Study in Ancient Chinese Hermeneutics 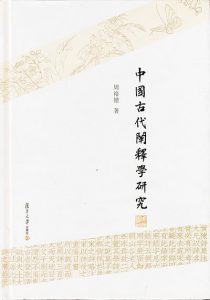 Since the 1980s, hermeneutics, the art of understanding and interpretation, has been increasingly present in the research and discussion of several disciplines. However, most of these discussions are still confined to the tradition of Western culture, and the thoughts of ancient Chinese philosophers were largely ignored. In order to realize a true cross-cultural dialogue, Zhou Yukai tries to introduce the inherent hermeneutics theory and tradition of ancient China to contemporary scholars as comprehensively and systematically as possible, so that the world can fully understand the rich connotation and unique value of ancient Chinese hermeneutics. This is his intention in writing this book, A study in Ancient Chinese Hermeneutics.

In the author’s view, this book explores the rich and varied theories of hermeneutics that have formed the Chinese tradition. It bases its findings on a thorough collection and analysis of discourse on textual interpretation that is scattered throughout ancient codes and records. The primary sources are studies of the Confucian classics, teachings of the Metaphysical School, translations and interpretations of Buddhist sutras, quotations of Chan masters, the works of Neo-Confucianism, and annotations of poetry from Pre-Qin times to the Qing Dynasty. This work also clarifies how the process of ancient Chinese hermeneutics and its theoretical values differed from Western theories of hermeneutics.

Consequent to a review of the arguments presented by the various Pre-Qin schools of thought regarding the relationship between language or thought and existence, the author concludes that the idea of “zheng ming” (rectification of names，正名) maintained by the Confucian school reflects a trustful attitude regarding the idea that words can effectively express one’s thought. In contrast, the Taoist concept of “wu ming” (no name，无名) reflects a skeptical attitude.

This study then provides an analysis of the “metaphysical hierarchy” regarding written and spoken languages, as well as thought and truth in the argumentation of Pre-Qin schools. On the basis of this analysis, it concludes that there are two conceptions which provide the foundations of Chinese hermeneutics. The Confucians stated that spoken words can be used to express ideas and written words can be used to express spoken words. Taoists claimed that “writing cannot perfectly express speech and speech cannot perfectly express ideas”. The Confucian view provided a common source for varied intentional interpretations that suggest a reader can understand what an author means. On the other hand, from the Taoists emerged a way of understanding that advocated, “forget the words by which the meaning is attained”. From this understanding, a tradition that emphasized the reader’s reception and response came into being.

Compared with other scholars who discussed Chinese hermeneutics only from the perspective of Confucianism and Taoism, the author also summarizes some characteristics of Buddhist hermeneutics from the abundant intellectual resources of Chinese Buddhism, which is one of the highlights and innovations of the book. In view of the fact that translation relates to textual interpretation, the book brings various theories regarding Chinese translations of Buddhist sutras into the scope of hermeneutical study thereby discussing the significance of translation as a mode of cross-cultural understanding and interpretation.

It also researches various features in commentaries and sub-commentaries to Buddhist sutras. The book advances a new idea regarding the saying from the Chan Buddhist sect: “Don’t use any written language and spread Buddhism beyond Buddhist sutras.” While this statement seems to oppose any textual interpretation of Buddhism, it actually expresses a deep understanding of Buddhist philosophy from the Chinese perspective. The Chan sect replaced the “text-hermeneutics” that relied on language, with “onto-hermeneutics” which was based on paralanguage.

Due to the limitation of space, the author does not elaborate further on the characteristics of Buddhist hermeneutics. For example, while the author focuses on the hermeneutical principles guided by the idea of “upāya” (skillful means) in the Lotus Sutra, he does not devote the same amount of attention to the more important idea of “prajna”, which often appears in pairs with upāya. Prajna is also a key term of understanding Chinese Buddhist translation and interpretation. But in any case, the book is of great help to understand the hermeneutic ideas in ancient Chinese Confucianism, Buddhism, and Taoism, as well as in poetics and literature.