A Study of the Lunheng 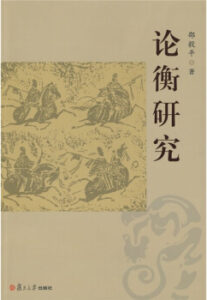 This book is a collection of Shao Yiping’s 邵毅平 research articles on the Lunheng 論衡 by Wang Chong王充 (27-97 CE), written over a period of ten years. While most scholarship on the Lunheng has concentrated on the debates over Wang Chong’s thought, Shao Yiping’s research employs a number of new approaches. Among his focuses are the formation of the Lunheng, as well as its relationship to Wang Chong’s other works. These important questions have not received enough attention, a situation that has to some extent sidetracked research on the Lunheng. While keeping an eye on Wang Chong’s thought, this book aims to provide new insights on studies of the Lunheng regarding basic facts such as date and process of composition, as well as to contribute to a deeper understanding of this profound philosophical classic.

Shao’s monograph comprises five sections. Section One, which includes four chapters, collects Shao Yiping’s articles regarding the formation of the Lunheng. Here, he introduces a new opinion regarding the date of the Lunheng’s writing, suggesting that it was written during the ten years between the end of Yongping 永平 (Emperor Ming 明帝, 28-75 CE), and the end of Jianchu 建初 (Emperor Zhang 章帝, 57-88 CE). He also suggests that Wang Chong wrote and compiled the Lunheng in a single round of production, rather than through three iterations, as previously assumed. In Chapter Three, he studies the interrelationship among the 85 chapters of the Lunheng, arguing that the order of chapter placement was determined both by chronology and by Wang’s own aims in compiling the work. Chapter Four explores the motivation behind the passages praising to Han, as well as how these passages reflected the political environment and compilation contexts of early Eastern Han.

Section Three discusses several questions regarding the circulation of the Lunheng. The first chapter casts doubt on a widely accepted tale that Cai Yong 蔡邕 (133-192 CE) only read the Lunheng after he entered the state of Wu 吳, and introduces the new hypothesis – based on several pieces of historical evidence – that Cai Yong had in fact read the Lunheng before entering Wu. The second chapter investigates the situation of textual circulation during the millennium between the Lunheng’s compilation and the publication of its first edition. Section Four focuses on the history of commentary on the Lunheng, considering the vicissitudes involved in how the Lunheng has been understood over the past two thousand years, as well as its relationship with intellectual history.

In Section Five, the author imports a comparative framework and brings new understanding to bear on Wang Chong’s thought. Through a comparative reading of Lucien Levy-Bruhl’s How Natives Think and the abnormal natural phenomena in Wang Chong’s discussion, the author attempts to reevaluate the rationalism of Wang Chong’s argument. Chapter Two comprehensively discusses Wang Chong’s pessimistic view of life and its relationship with his own life story and the intellectual climate of his time. Chapter Three investigates the nine standards upon which Wang Chong constructed his theories in order to resolve the contradictions in Wang Chong’s literary theories. Chapter Four compares the literary theories of Song Si-yeol宋時烈 (1607-89 CE) and Wang Chong, analyzing the role of Utilitarianism in their thoughts.

The articles collected in this book exemplify not only models for making solid arguments using traditional methodologies in Classical Chinese research, but also for innovative approaches such as exploring the Lunheng through comparative frameworks. The author’s inclination to consider Chinese literature and philosophy as part of world literature helps him succeed in breaking through the limitations of nationalist scholarship. Moreover, based on detailed textual analysis, the author attempts to grapple with bigger questions. For instance, in the last chapter, Shao points out that Song Si-yeol and Wang Chong expressed similarity in the function of literature: they posited literature is the tool with which to convey thought. Importantly, the author also sketches out blueprints for further research by asking still larger questions such as why the conception of literature based on Utilitarianism is so common in Chinese literary history.[1] To summarize, Shao Yiping’s A Study of the Lunheng 論衡研究 raises new opinions, provides new evidence for solving long-debated issues, and suggests new possibilities for how to read the Lunheng and Wang Chong.