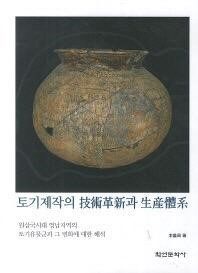 Ceramic comprises the most substantial part of archaeological data due to its durability. Therefore, it is possible for archaeologists to establish a relative chronology of artifacts and sites based on ceramic typology and temporal sequence, which is the primary task of archaeology. However, the excessive emphasis on typology based on the shape and decoration of ceramics sometimes leads archaeologists to lose sight of the importance of understanding the human behaviors associated with the materials—how and why people made, used and discarded the materials and the social context in which those behaviors occurred.

The author of this book takes up these social-historical questions in his thesis on how the Proto-Three Kingdom period ceramics in Youngnam province emerged and changed in terms of technological innovation and production systems as a result of intended behavioral changes.

Given that the ceramic-making process consists of selecting clay, shaping, surface processing, and firing, an introduction of new ceramic assemblage follows the procedures of the selection of new technological elements and practice of them by craftsman within a specific social context which calls for the technological innovation. And in some cases, the new technology ultimately leads to the reorganization of ceramic production and distribution system. To trace these processes, the author carefully observed the technological elements of ceramics and their changes over time. Based on this theoretical framework and methodology, the author suggests insightful interpretations about three main topics: 1) the emergence of high-fired earthenware (Wajiltogi), 2) the emergence of stoneware (Dojiltogi), and 3) the regional differences in ceramic technology innovation processes during the Proto-Three Kingdom period.

The contribution of this book to Proto-Three Kingdom archaeology is enormous. Most importantly, this book tries to move from ‘when’ and ‘where’ questions to ‘how’ and ‘why’ questions. While previous research has focused on where a new type of ceramic came from and when it was introduced, his work addressed larger and more meaningful questions about how a new type of ceramics was introduced and spread within a society and why a new technology was selected by people to the center of his discussion. The emergence of high-fired earthenware and stoneware used to be interpreted as a result of migration of people or diffusion of new ceramic assemblage in the previous study. However, he illuminated the sequential process of applying new ceramic making techniques to the existing technological system and related them respectively to the social demands for new prestige good and mass production. In the same manner, different regional ceramic styles, which used to be interpreted as reflecting political boundaries among different groups was explained in terms of the spatiotemporal differences in technological innovation according to the different levels of existing ceramic technologies, size of production systems, and social contexts.

However, as it is a pioneering study, some points of this research still need to be investigated further. In this book, ceramic technology was dealt with enough; however, production-distribution systems, which is another focus of his research, was not fully investigated. He mentioned some related topics, such as the range of ceramic distribution across political boundaries and the relationship between political authority and craftsmen, but he didn’t take them far enough for them to add to his thesis. Methodologically, the matter of production-distribution system requires further consideration of production sites and consumption in the settlement sites, as well as detailed observation of pottery from burials. Nonetheless, the importance of this study cannot be minimized. His work has a great influence on Korean archaeology not only as a significant Proto-Three Kingdom period ceramic study in Youngnam province but also as a start of important new discussions about theory and methodology within the field of archeology.