The Great Kantō Earthquake, the Korean Massacre and its Aftermath: The Responsibility of the Japanese Government and People 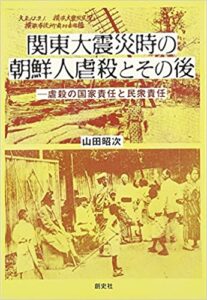 On September 1, 1923, a strong 7.9-magnitude earthquake struck the Kantō area of Japan, which includes Tokyo. False rumors about a ‘Korean revolt’ (chōsenjin sawagi)’—for instance, that Korean residents in Japan intended to poison the wells, or that Koreans were carrying bombs (in fact, apples)—spread around Tokyo, which was in a state of disorder due to the great earthquake. This led to a sudden wave of killings of Koreans in the disaster area, with more than 6,000 Korean people murdered at the hands of vigilante groups, police, and soldiers due to these rumors.

Historiography of the Great Kantō Earthquake has mainly focused on issues concerning the reconstruction of Japanese society after the disaster. Since 1945, however, some zainichi Korean scholars in Japan and a few Japanese researchers have tried to shed light on other aspects of the earthquake, including the massacre of Korean people in 1923 and its deliberate concealment by the Japanese government. Since the publication of The Great Kantō Earthquake and Koreans (Kantōdaishinsai to Chōsenjin, Tokyo: Misuzu Shobō, 1963) by zainichi scholars Tŏksang Kang and Pyŏngdong Kŭm on the 40th anniversary of the earthquake, this issue has received substantial attention from zainichi and Japanese scholars. The research published on the 80th anniversary of the earthquake is noteworthy for the fact that three great scholars in this field—Tŏksang Kang, Shōichi Matsuo, and Shōji Yamada—published their books in this year. The work reviewed here is a revised and enlarged edition of Yamada’s 2003 book.

The particular focus of the book is the issue of the responsibility of the Japanese people (minshū) for the Korean massacre in the earthquake. According to Yamada’s argument, Japanese minshū are responsible for participating in the massacre and not calling for an investigation by the Japanese government in 1923 and after. One of the reasons for Yamada to publish this revised and enlarged edition in 2011 was the movement, called ‘Kantōdaisinsai Chōsenjin Gyakusatsu no Kokka Sekinin o Tō Kai’, started in 2010, by zainichi Koreans and Japanese who demanded that the government take responsibility for the Korean massacre after the earthquake. Yamada argues that Japanese minshū are responsible for delaying this movement, which is why he included “the Aftermath” in the title of this revised edition.

Many of Japan’s younger generation today do not think that the problems created by Japanese colonialism before 1945 are their responsibility, and they are not interested in these issues, including the 1923 massacre. Similarly, Korean youths are also forgetting the history of colonial period and some of them are not concerned about these issues. The lack of interest among the young generations in both countries regarding these historical problems is a resounding indictment of both the Japanese and Korean people: namely, for this glaring gap in historical consciousness between those of the old generation who suffered during colonization and the new generation who lacks any experience with colonialism.