There were such 500 years: Quảng Nam’s identity from the view of historical periodization 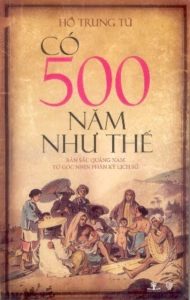 There were such 500 years is a thought-provoking book in which the author opens new possibilities in using historical periodization to understand cultural exchange between the Chams and the Viet people in characteristics of Quảng Nam. The timeframe of this book is 500 years from the marriage of Princess Huyền Trân of Đại Việt and the Champa king Chế Mân to the enthronement of Gia Long (1306- 1802A.D). These 500 years contain major events with remarkable influence on the history of Cham-Viet cultural exchange and accumulation as well as the identity-building of Quảng Nam.

Using periodization as the essential method, dynastic annals and genealogy records as main sources, Hồ Trung Tú attempts to shed light on the overlooked role of the Cham people and their interactions with the Viet in establishing and nourishing Quảng Nam identity. Using an interdisciplinary approach to examine the cultural history of this province, the author suggests a new view of Nam Tiến (Southward Advance) of Đại Việt; that is, in his opinion, not a smooth and linear process but rather a fluctuating period of ups and downs as well as changes and exchanges between the two main ethnic groups. The author urges the departure from the stereotype of dynastic history, which assumes that the Viet came to a desolated land due mainly to the Cham fleeing it in the wake of political and military conquests. Hồ Trung Tú attempts to convey the complicated cultural exchanges that happened along with the political and demographic changes. In this process, Cham and Viet villages in Quảng Nam were situated in close proximity to one another, thereby laying the foundation for diverse and complex interactions (p10, p110). The author also figures out the role of the period between main events, which was long enough to generate cultural influence and stabilize cultural and linguistic identities such as the construction of Trường Dục rampart and the total separation of two sides of this rampart for 140 years (p.13). In the sixth chapter, the author explains the existence of a “linguistic oasis” in Quảng Nam from the same vantage point. These analyses are extremely valuable because, for the first time, this strange phenomenon was approached and discussed in the historical context and periodization through using logical and inspiring explanations. Similarly, the sharp and convincing analyses related to Barrow’s pictures are astonishing.

To be sure, there are some weak points in the book. In the part regarding language exposure and contact, the author should not ignore the change and evolution of the Cham language itself in the examined period. At some points, his eagerness and enthusiasm pushes some conclusions too far. For example, such statements as “Mỹ Sơn is a heritage from our ancestors, not from a collapsed Champa kingdom” (p.218) proves controversial amongst Champa scholars and historians, as most historical research related to this world heritage and its owner shows the opposite. Yet, despite these limitations, Hồ Trung Tú paints an exquisite picture of cultural accumulation and identity-building of the northern Quảng Nam. He also energetically and insightfully introduces readers to a new path of historical research in this rewarding and easy-to-read book.