Through the ‘Indian Lens’: Observations and Self-Reflections in Late Qing Chinese Travel Writings on India 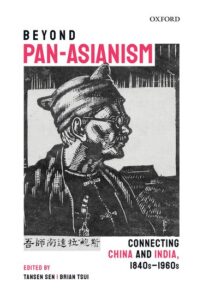 About the book: Within Asia, the period from 1840s to 1960s had witnessed the rise and decline of Pax Britannica, the growth of multiple and often competing anti-colonial movements, and the entrenchment of the nation-state system. Beyond Pan-Asianism seeks to demonstrate the complex interactions between China, India, and their neighbouring societies against this background of imperialism and nationalist resistance. The contributors to this volume, from India, the West, and the Chinese-speaking world, cover a tremendous breadth of figures, including novelists, soldiers, intelligence officers, archivists, among others, by deploying published and archival materials in multiple Asian and Western languages. This volume also attempts to answer the question of how China-India connectedness in the modern period should be narrated. Instead of providing one definite answer, it engages with prevailing and past frameworks-notably ‘Pan-Asianism’ and ‘China/India as Method’-with an aim to provoke further discussions on how histories of China-India and, by extension the non-Western world, can be conceptualized.

About the author: Zhang Ke was a HYI Visiting Scholar from 2019-20.