A Japanese animist in the Kachin hills: Toshihiro Yoshida’s ethnographic books on the Kachin people in Northern Myanmar 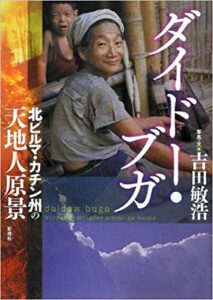 The Kachin people have been receiving much attention recently because of the war between the government of Myanmar (Burma) and the Kachin Independence Army (KIA). This war—or, more precisely, the latest phase of this half-century-long war—began when a seventeen-year ceasefire agreement between KIA and the Myanmar government broke down in 2011. In the beginning of the year, a new parliamentary era began in Myanmar and the government started a succession of initiatives towards political reform, including ceasefire negotiations with various insurgency groups. In the midst of this process, relations between the government and the Kachin, who had already reached a ceasefire agreement in 1993, dramatically deteriorated, and war broke out in June.

The Myanmar government launched an exceptionally intense military offensive, even deploying the air forces. The war caused waves of refugees to flee to the Chinese border, where many still remain in make-shift facilities today.⁠1 The tense situation on the border escalated to the level that a group of Kachin-Jinghpaw kinsmen in Yunnan held a protest march against the Myanmar government—a historically unprecedented event.

Quickly after the resumption of this war, Toshihiro Yoshida, a Japanese nonfiction writer, published a book on the Kachin people titled Daido buga. The title means “home land” in the Kachin (Jinghpaw) language. The book is not at all about the war. In it Yoshida presents old photographs from rural villages, which he himself took during his long-term stay in the Kachin region in the 1980s. He hoped that the publication would raise awareness in Japan about “what the Kachin and other minority peoples are trying to protect” (141). Daidaw Buga is in fact Yoshida’s fourth book about the Kachin region. Consisting of numerous photos, it effectively serves the reader as a visual companion to his three earlier books of prose. Because his books have never been discussed in English, this review will first briefly introduce the author and his books, before presenting a critical reflection of this unique ethnography.

Yoshida first visited Southeast Asia’s uplands in 1977 as a nineteen-year-old college student. Travelling in remote corners of northern Thailand, he was so enchanted by the upland peoples he encountered that he returned to the area repeatedly. Eventually he found himself talking with insurgents from Myanmar in the infamously porous borderland. In January 1985, he started to walk with troops of the Kachin Independence Army. He ended up spending three years and seven months with Kachin soldiers, criss-crossing the mountains of northern Myanmar.

From the beginning of the journey, Yoshida was determined to write about his experience. He quickly learned the Kachin (Jinghpaw) language; in fact he became so fluent that after a year or so the people he met assumed him to be a native Kachin. During the long journey across northern Myanmar, he took copious notes. When he eventually arrived back on the Thai border in October 1988, having survived life-threatening malaria, he was carrying 31 notebooks and 2,800 photos. It took another seven years until he managed to complete his first book in Japan. When the 600-page monograph was finally published, it won the Ooya Souichi Award, the most prestigious award for non-fiction writing in the country. Between 1995 and 2000, he published three books on the Kachin, in which he presented detailed descriptions of livelihood and cultural practices of Kachin and other peoples, covering an unusually wide range of topics: farming, hunting, handicraft, embroidery, architecture, cooking, music, myth and legend, festival and ritual, oral history, linguistic diversity, kinship structure, naming rules, and so on. His books collectively present probably the most detailed ethnography of rural Kachin society in Myanmar ever published since The Kachins: Their Customs and Traditions (1913) by Ola Hanson, a Baptist missionary, and The Kachins: Religion and Customs (1922) by C. Gilhodes, a Catholic missionary.

Although, in Japan, Yoshida is rightly acknowledged as the single most authoritative researcher on Kachin, his writings have never been translated into English. One of the reasons for the lack of international readership I think is that Yoshida eschews theory. Many scholars—anthropologists especially—are familiar with the Kachin from Edmund Leach’s 1954 The Political Systems of Highland Burma: A Study of Kachin Social Structure. Yoshida, however, never engages with this extremely influential work by the British anthropologist. Yoshida is an entirely self-taught ethnographer, having never attended graduate school. In fact there is basically no engagement with academic anthropological literature in his writings.⁠1

Yoshida has written more than a dozen books on a variety of topics in the past twenty years including Thoughts against Air-Bombing (2006) and Okinawa: the Place in Japan Closest to Warfields (2012). Occasionally, he writes about Kachin for academic publications. For instance, recently he has written the chapter 63-page chapter on Kachin in a large scholarly volume, General Introduction to Myanmar (Myanmaa Gaisetsu 『ミャンマー概説』）.

In the Japanese academia, especially in Area Studies, there is a room for non-academic and non-theoretical writers like Yoshida, because the Japanese scholarship is generally not driven by theory. Anthony Reid, the great historian of Southeast Asia, has commented on this particular feature:

The Japanese model emphasized total immersion in the field, with a minimum of theoretical disciplinary alignment by western standards. … Because it is resistant to the theoretical trendiness which often drives American social science, this tradition often appears to westerners refreshingly rich in data if sometimes theoretically modest. (Reid 2004: 6)

Japanese scholars are typically known for their linguistic and data collection skills acquired during their fieldwork, while their theoretical contributions are typically modest.⁠2 Yoshida’s ethnography certainly shares these qualities. Unlike many books of academic ethnography, however, his books on Kachin have enjoyed an unusually wide audience in Japan. His ethnography has been read by people who have no particularly interest in Kachin or anthropology.

One reason, I suspect, is Yoshida’s strong focus on animism as the Kachin authentic cosmology. This characterization is done in such a way that it resonates well with the Japanese’ own animist sensibility. For example, Yoshida treats the notion of life-and-death cycle as a recurrent theme in his Kachin ethnography. He stresses that in the Kachin cosmology insects, trees, animals, and humans all go through the cycle of life and death. But this view sounds very much like a Japanese cosmology of impermanence.

According to Yoshida, the veneration of forest spirits (森の精霊）is central to the Kachin religious culture. Trees and forests are the defining motif of his ethnography. (Each of his books bears a tree-related word in the title.) He presents lyrical descriptions of the spirits and their powers. He characterizes swidden farming as a symbol of the relationship between the Kachin people and forest spirits. (This view is most explicitly laid out in the chapter “Swidden farming and the gift of the forest” in his Northern Burma—In Search of The Roots of Life). Indeed, his entire ethnography on the Kachin can be read as odes to forest spirits.

I wonder to what extent Yoshida’s ethnography betrays a distinctly Japanese ethnological perspective. In his historical analysis of Japanese ethnology in the early twentieth century, Prasenjit Duara has identified a persistent quest for “authentically primitive” in the ethnographer subject. He examined how “’the primitive’ in the periphery frequently represents human nature” in the Japanese ethnological literature (Duara 175) and how such romanticization is achieved by selectively highlighting “the practices among [the primitive] that resemble those of the Japanese” (186). While the focus of Duara’s analysis was the Japanese representation of tribal frontier in Manchukuo in the interwar period, his insights are applicable to the post-war period as well. The Japanese search for primordial authenticity in Asian forests has clearly outlived the Japanese imperialism of the early twentieth century.

This continuity of the pan-Asianist ethnological view from the pre-war era to the present has received little scholarly attention—even in Japan. The recent scholarship has understandably stressed the contrast between the outward Asianist persctive of the imperial era and the inward perspective of the post-era. As Eiji Oguma (小熊英二） has compellingly shown in A Genealogy of Japanese Self-Images （『単一民族神話の起源 「日本人」の自画像の系譜） and especially The Boundaries of the Japanese （『日本人』の境界 沖縄・アイヌ・台湾・朝鮮植民地支配から復帰運動まで』）, the geographical and ethnic boundaries of the people understood as “the Japanese” changed dramatically before and after the war. While “the Japanese people” was imagined to be spatially expansive and ethnically heterogeneous during the imperial era, the same people came to be understood as a homogeneous ethnic group, which has resided together and maintained a distinct culture for a long time in the same islands. The pre-war Asianist view, which stressed ethnic contiguities between the Japanese and other Asians, has been replaced by the post-war discourse of the Japanese as a unique and uniform ethnic group—especially in the popular nationalist rhetoric.

At the same time, a pan-Asianist imagination based on primordial ties with authentic tribal culture survived in different formats and continues to be popular. An intellectual source of inspiration for this new pan-Asianist imagination has been the “laurel forest culture sphere” (照葉樹林文化圏) thesis, advocated since the late 1960s by well-established university scholars scholars such as Sasuke Nakao (中尾佐助 1916-1993) and Koumei Sasaki (佐々木高明 1929-2013). It proposes a contiguous region from the eastern part of the Sino-Himalayas to the western part of Japan as a distinct cultural zone based on ecological, agricultural, culinary commonalities.

Theses like the “laurel forest culture sphere” theory has attracted writers and artists, who seek an alternative, Pan-Asian cultural geography. It led to a popular myth that the Yunnan-Assam range of the eastern Himalaya region was the root of the ancient Japanese culture. This hypothesis, based on highly selective “common cultural elements,” inspired countless nonfiction books and documentary products, including A Journey to the Naga Highland: In Search of the Origin of the Japanese (『秘境ナガ高地探検記―日本人の源流を求めて』) and In Search of the Origin of the Ancient Japanese called “Wa”: Expeditions to Highlands of Yunnan and Assam (『「倭人」の源流を求めて―雲南・アッサム山岳民族踏査行』). From 1992 to 1994, the private broadcasting company TV-Tokyo made a series of documentary program titled Origins of the Japanese (『日本人の源流』）, which produced a series of documentaries, featuring Nagaland, Bhutan, Tibet, and other places in the eastern Himalayan region.

It would be wrong to reduce Yoshida’s ethnography to a product of these hypothesis of Japanese cultural origins. At the same time, a full analysis of his writing on the Kachin would have to take into account the inspiration he drew from them. On occasions he approvingly refers to the “laurel forest culture sphere” in his writing, especially when he talks about food (especially in the chapter “Fermentation and the Milk of Mother God” (“発酵と母なる神の乳”) in 1997). He also admits that his initial interest in upland Southeast Asia was based on his search for an alternative geography of Asia, one not based on modern nation-states but on premodern cultural flows (Yoshida 1998). Yoshida was certainly not alone in Japan in seeking historical and geographical imaginations that would challenge the dominant ideologies of nation-state and capitalism. The celebrated film-director Hayao Miyazaki too admits that he drew inspiration from Nakao’s ethnobotanical studies including the laurel forest culture hypothesis. His popular films such as My Neighbor Totoro and especially Princess Mononoke indeed show the influence. It is worth noting that both Miyazaki and Yoshida have been very active for environmental protection and against militarization.

Yoshida’s books are not only among the most substantive ethnographic descriptions of the Kachin people. No one has been able to conduct a fieldwork as substantial as his after Leach. His study from the inaccessible, war-torn region makes an indelible contribution to the Kachin scholarship. At the same time, Yoshida’s ethnography can also be read as a piece of Japanese literature, expressing distinctly Japanese aesthetic and cosmological sensibilities. These books present rich texts from which we learn about a Japanese animist’s cultural encounters in the Kachin hills.

1 Yoshida is thoroughly familiar with Leach’s work. When I met Yoshida in person in Japan, he told me that while he was walking across the Kachin region he was carrying a copy of Leach’s book. He had actually shrink-photocopied the entire book to make a small and lighter copy for his journey.