Toward a New Image of Paramartha: Yogacara and Tathagatagarbha Buddhism Revisited 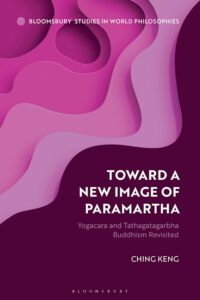 About the book: Yogacara and Tathagatagarbha are often regarded as antagonistic Indian Buddhist traditions. Paramartha (499-569) is traditionally credited with amalgamating these philosophies by translating one of the most influential Tathagatagarbha texts in East Asia, the Awakening of Faith in Mahayana, and introducing Tathagatagarbha notions into his translations of Yogacara texts. Engaging with the digitalized Chinese Buddhist canon, Ching Keng draws on clues from a long-lost Dunhuang fragment and considers its striking similarities with Paramartha’s corpus with respect to terminology, style of phrasing, and doctrines. In this cutting-edge interpretation of the concept of jiexing, Keng demystifies the image of Paramartha and makes the case that the fragment holds the key to recover his original teachings.

About the author: Ching Keng was a HYI Visiting Scholar from 2021-22.