The Tragic History of the KMT Troops in the Golden Triangle, 1950-1981 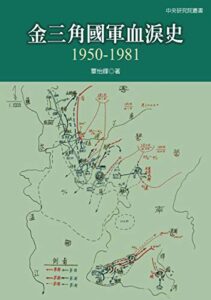 The story of the Chinese Nationalist (Kuomintang or KMT) forces entrenched in Shan State of Burma and northern Thailand from the 1950s to 1980s is a complex and controversial history that involved Taiwan (the Republic of China), China (the People’s Republic of China), Burma, the United States and Thailand and highlighted the confrontation between the Communist and Democratic blocks in the region during the cold war period. Qin Yihui’s is the first book-form publication that attempts to disentangle this complex history from the perspective of the Republic of China. Prior to his book, two Ph.D. dissertations (Young 1970; Chang 1999) and quite a number of academic papers and book chapters had dealt with the topic from different disciplinary perspectives (e.g., Taylor 1973; Chao Tzang Yawnghwe 1990: 96-151; McCoy 1991: 349-386, 409-435; Lintner 1994: 101-129; Chang 2001, 2002, 2005, 2009; Callahan 2003: 145-171). What is special about this book is that Qin is the first to plumb the state and Kuomintang archives in Taiwan, thanks to the KMT government’s 1999 removal of the ban on public access to the state archives. Apart from official materials, Qin also draws on memoirs of and interviews with former KMT guerrilla leaders. Moreover, the author, a retired researcher from Academia Sinica in Taiwan, was himself a child soldier of the guerrilla troops in Burma for a few years. As he confessed at the beginning of the book, his research originated from a mission assigned by his former officers in 1995 (p. 2 and 3).

The book begins with the loss of Yunnan, the last province retained by the KMT, to the Chinese Communists at the end of 1949. Thereafter, an unprecedented Yunnanese exodus to Burma and other neighboring countries took place. Some of the remnants of the nationalist army and former self-defense guards who escaped to Shan State of Burma soon organized themselves into the KMT guerilla forces. After forging a connection with the Nationalist government which had retreated to Taiwan, and obtaining from it official recognition and supplies, the KMT also sought support from the US, as the leader of the cold-war alliance opposing the spread of communism. Thailand, an important post-WWII ally of the US in Southeast Asia, also aided the guerrillas, facilitating the transfer of weapons and other supplies to KMT bases in the Shan State of Burma. The newly independent state of Burma, already feeling vulnerable with Communist China to its north and American-supported Thailand to the southeast, looked upon these KMT forces as a threat to its national security. This belief was fueled by the KMT’s alignment with ethnic rebel groups within Burma whose insurgencies had annoyed Burma’s leaders since independence in 1948.

The first part of the book explores the development of the KMT forces in Burma and two evacuations of a portion of the troops to Taiwan under international pressure in 1953-1954 and 1961. The second part deals with the reorganization of the remnant forces that retreated to border areas of northern Thailand in 1961, their movement between Thailand and Burma for contraband trade and intelligence work, and their involvement in combating Thai Communists at the request of the Thai government. These troops were not disbanded until the late 1980s. Following a chronological line, Qin illustrates the complicated interactions between the KMT forces and the different nations referred to above, the friction and fragmentation of the KMT guerrillas, and the struggles among the different factions within each state regarding the KMT issue. Relying on the state archives, Qin meticulously presents the complexities of the guerrilla organization, its military sites, the types and quantities of arms from Taiwan and the US, its tactics during different battles and retreat routes. Nevertheless, the overall viewpoint is from Taiwan, focused on the official level with a male orientation. The stories of female soldiers and ordinary soldiers are not included. Moreover, the issue of whether the entrenchment of the KMT guerrillas in Shan State led to the militarization of Burma (already raised by Taylor and Callahan) is not discussed at all.

To sum up, Qin’s exploration of the state and KMT archives on the issue of the KMT forces in Burma and Thailand is valuable. Through this case study, he highlights an important part of the cold war history of the region. However, his writing remains too close to his sources and does not elevate the discussion to a higher level to reflect on the questions of state sovereignty and the legitimacy of national and international laws. Evidence on some issues appears weak or doubtful, for example, on the relationship between the KMT guerrillas and the Shan rulers and people (p. 69, 123, 137) and the attitude of the Burmese front-line commanders towards the KMT (p. 70). The rhetoric is from time to time nationalistic, inserting moral judgments on certain figures and events. The epilogue on Sun Yat-sen’s philosophy and the current political situation in Taiwan is ideological narration and irrelevant to the main themes of the book. Future analysis would benefit from the inclusion of different angles, such as those from Burma, Thailand, China and the United States.

Chang, Wen-Chin. (1999) “Beyond the Military: The Complex Migration and Resettlement of the KMT Yunnanese Chinese in Northern Thailand.” Ph.D. dissertation, K.U. Leuven, Belgium.