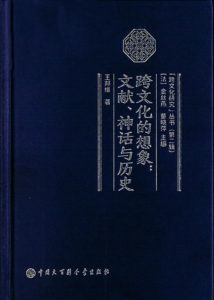 Transcultural Imagination: Literature, Myths and History (《跨文化的想象：文献、神话与历史》) is written by Bangwei Wang (王邦维), a professor at Peking University specializing in Sino-Indian research. The book contains five chapters with reference to cultural exchanges between China and India, as well as Persia in medieval times, Buddhist history and texts, and Chinese ethnic myths and history. Three of the chapters are academic papers, while the rest are abstracted from lectures. Each gives a glimpse of communication in various fields, with Buddhism as the intermediary, between the three eastern and ancient regions.

The first chapter is entitled “‘Shadowless in Luo Zhou’ and ‘Centre of the Sub-celestial’” (《 “洛州无影”与“天下之中”》). Based on historical documents and Buddhist texts, it discusses how the shadowless-ness under the sun in Luo Zhou—another name of Luoyang (洛阳), the eastern capital city of the Tang Dynasty—is quite different from that in central ancient India recorded by the Buddhist monk I-Tsing (义净) in his book A Record of Buddhist Practices Sent Home from the Southern Sea (《南海寄归内法传》). Despite the fact that I-Tsing used the term “shadowless in Luo Zhou” to indicate where there is actually no shadow under the sun, this term came out as a description of a deliberately designed shadow measurement unit which was originally built in the Zhou Dynasty and rebuilt in the Tang Dynasty in Luoyang, which is where the capital of the two empires was located. The unit was subtly constructed by the monarchs to avoid the shadow projected onto the ground at a certain time of the year in order to declare the centrality of the sub-celestial and the legitimacy of sovereignty. It went on as political ideology and grew in cultural confidence from generation to generation and was not formally and firmly doubted until the Tang Dynasty, when more and more Buddhist monks traveled to central India and witnessed the real shadowless-ness.

The second chapter, “Buddhist Thought of Centrality and Sense of Cultural Superiority in Medieval China” (《佛教的“中心观”与古代中国的文化优越感》), is one of the arguments given by an erudite monk named Dao Xuan (道宣) who summarized the opinions of his precursors and demonstrated in five aspects that India was the center of the secular world. The sense of Han cultural superiority is manifested in the books written by monk Xuan Zang (玄奘) and I-Tsing, who both traveled to India, stayed for a long time and finally returned regardless of obstruction. The legitimacy of the centrality of China became gradually and seriously challenged by Buddhist elites, while Buddhism grew more popular and the knowledge of the western regions became more widespread in medieval times. However, there were still many monks who insisted that Chinese culture should be superior over others, though accepting India’s central position of the world. Debates between the two Buddhist sects, even among official scholars, continued for a few hundred years until the Song Dynasty when Buddhism lost its connection with India and developed systematically and theoretically by itself in eastern Asian.

The third chapter, entitled “Darṣṭāntika and the Application of Daṣṭānta in Buddhist Canon”(《譬喻师与佛典中譬喻的运用》), is a compilation of research on story-tellers ( darṣṭāntika in Sanskrit) who utilized folktales and sometimes visual presentations to illustrate opaque and tedious Buddhist doctrines, and the application of various stories (darṣṭānta or avadāna in Sanskrit) in Buddhist texts. It is likely that darṣṭāntika or storytellers came into being during the 2nd B.C. to 2nd C.E. among Buddhist sectarians in ancient India in the process of disseminating Buddhism. In the Buddhist history, they had close connections with Sarvāstivādin—a sect mainly located and dominating in Gandhāra area. However, there is a high possibility that darṣṭāntika or storytellers and the Sarvāstivādin developed respectively on separate levels and courses. It must have been due to the frequent application of similes and emphasis on the identity of darṣṭāntika in the Sarvāstinvādin sect, whenever referred to in later times, that results in synonyms. Darṣṭānta or similes are widely applied in Buddhist texts on account of these storytellers to a certain degree. The texts can be generally classified into five categories based on Chinese Buddhist scriptures from the 1st to 6th century: (1) Dhammpada or verses of the doctrine by Buddha, (2) sutras composed of darṣṭānta written by darṣṭāntika, (3) Aśokāvadāna or legends of King Aśoka, (4) Buddhacarita and sutras with respect to Buddha’s life stories, and (5) vinaya or Buddhist disciplines. Such texts have an immense influence on classical Chinese literature and need to be further discussed.

The fourth and fifth chapters are abstracts from lectures. The title of the fourth is “How Myths are Confused with History: Stories of Three Places” (《神话怎样与历史纠结：三个地名引出的故事》). The topic arises from a record in the book Jami’al-Tawārkh or Compendium of Chronicles by a famous Persian vizier Rashīd-al-Dīn Hamadani. According to the record, Dāy Līu (大理), an area in southwestern China, is mixed up with two other places Gandhāra and Qandahār in central Asia. The reason is likely that people in Dāy Līu confused the stories of their ancestors with Buddhist myths and legends of King Aśoka and wrote them down in the historical documents. These documents were then brought across the continent to the medieval Iran, the Ilkhanate Empire, by the Mongols or travelers in the 13th century. As a result of the translation and religious similarity, Rashīd finally made the connections between the three different places.

The fifth chapter, “Indianization or Sinicization: the Communication and Interaction between India and China in Buddhist History”(《“西化”还是“中国化”：从佛教的历史看中外文化的交流与互动》), holds the opinion that while Buddhist conquest or Chinese transformation is the conclusion drawn from the diverse perspectives, the fact is that Buddhism and Confucianism and Daoism, namely Indian and Chinese culture, have been blending with each other non-stop during the past two thousand years in many aspects such as language, images, rituals, principles, thoughts and so on.