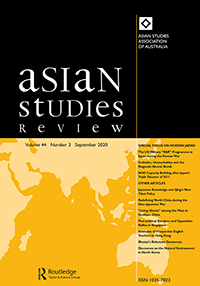 Prof. Chen was awarded the 2020 Wang Gungwu Prize by the Asian Studies Association of Australia for the article.

Abstract: The Qing Empire maintained a reciprocal relationship with Tibet for more than a century after acquiring it in the 1720s. The Manchu court granted Tibet a high degree of autonomy while Tibetan leaders obtained a strong ally to defend them from foreign invasion by compromising part of their authority. The mutually beneficial relationship, however, ended in the 1900s when the Manchu court adopted predatory policies to tighten its control over Tibet to resist British and Russian expansionism. This article explores the often-overlooked impact of Meiji Japan, and aims to reveal its role in setting the intellectual framework for the Qing Empire’s new Tibet policy. I argue that Japanese knowledge of imperialism and Tibet promoted an imperialist worldview, which conceptualised the Tibetan frontier as a colony that needed to be exploited, civilised and nationalised. Through an in-depth discussion of discourses on Tibet produced by Japanese elites, Chinese students in Meiji Japan, and Chinese elites in China, as well as policy proposals drafted by Chinese officials, I demonstrate that Japanese knowledge shaped Chinese perceptions of Tibet and was translated into the Qing Empire’s new Tibet policy. Ultimately, the article aims to reveal a specific mechanism of imperialism, which attempted to convert China into its accomplice.

About the author: Chen Fei was a New Approaches in Asia-Pacific Historical and Contemporary Studies Training Program Visiting Scholar from 2020-21.