The Transnational Medical Institution in China in the First Half of the 20th Century: a Case Study of the Peking Union Medical College 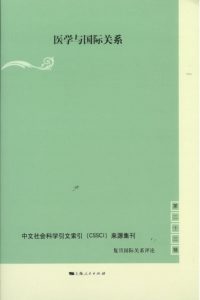 The Rockefeller Foundation’s philanthropy in medicine has often been depicted in existing scholarship as merely one component of American attempts at economic and cultural domination in China.

Jiang Yuhong through this article tries to highlight this narrative in a different way. The author places PUMC (Peking Union Medical College) at the center of the historical development of Western Medicine in China and contends that such development should be seen through the prism of international history: that is, the growth of the PUMC is intertwined with the rise of international society in the early twentieth century. She further illustrates that, apart from the Americans and the English, there were other European actors who were equally influential in the making of ‘Modern Medicine’ in China. It also highlights the crucial part played by Christian missionaries in the making of the western idea of medicine in China. This article speaks to the history of medicine in China during a key period of modern transformation, to the history of the changing landscape in global politics and its relation to the growth of western medicine and the global projects of building modern public health institutions.

This article highlights the development of ‘Western Medicine’ with a focus on the role of Peking Union Medical College, the so-called ‘Johns Hopkins’ of China established by the Rockefeller Foundation. Rockefeller’s interest in medicine in the east was informed by the notion of cultural superiority where the east was looked at as culturally inferior as compared to the European west. The existing mission hospitals suffered from lack of funds and hence ceased to function well. Compared to the missionary medical institutions, PUMC’s medium of language was English. This proposition was initially opposed but, with the greater aim to assimilate with global medicine, they decided on the English language as the main medium of instruction.

The politics of establishing modern medicine in China can be seen through the lens of medical missionaries who preceded the foundations. Two important aspects of medical missionaries in China have been funding and teaching. It is widely recorded that there was a dearth of translated texts and information in medicine before the missionaries. The creation of western hospitals to the Chinese represented foreign culture and religion. In trying to navigate the transformation in western medicine, Jiang Yuhong, taking historical chronicles, illustrates the first contact of western medicine starting with the Qing court, narrating how medicine was able to break the barriers of the palace courts. Christianity as a religion was rejected vehemently by the Qing court but when it came to western medicine, the medical missionaries had access to treat the royals. Then came the Rockefeller Foundation with ample funding and influence. Yuhong tries to trace the development of PUMC through this tumultuous period and highlights how in different phases and spaces of political contention and wars both within and outside, PUMC’s excellence based on superiority of western medicine helped its growth throughout the years.

The Christian missionaries had done a substantial amount of work in building western medical hospitals and institutions but the idea of ‘Scientific Medicine’ was well established with the building of the PUMC. Questions around knowledge and power, and the legitimacy of one knowledge system over the other, play out clearly in this whole story as the author tries to unweave the power of elites both in the Qing court and during the republic. The role of Japan is also an interesting question that needs more careful attention here. Apart from the missionary medical schools, some of the earliest western medicine trained Chinese were taught in Japan. Use of the English language as the main medium of instruction not only coincides with global growth of international health but also posits an important question around modernity and the factors that signify modernity to the Chinese.

Jiang Yuhong chronicles the growth, development, transformation and transition of western medicine through a detailed narrative on the factors and the politics that informed this change on the knowledge and idea of medicine in China. This article moves away from the anti-imperialist rhetoric of the past and gives a fresh perspective on looking at the role of Rockefeller philanthropy in medicine and also of the missionaries. This narrative serves as an important reminder of how western philanthropic activity shaped and sustained the knowledge of the western idea of medicine in China.