Treason and Loyalty to the Royal Court: The Kan Narrative in Nineteenth- and Early-Twentieth-Century Khmer Chronicle Manuscripts 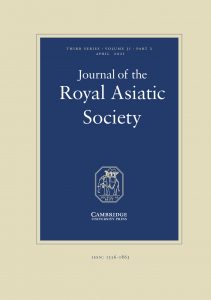 Abstract: The Kan narrative presents a series of events that are believed, by many Cambodians today including top leaders, to be the historical contestation for kingship between a commoner named Kan and members of the royal family during the early sixteenth century. Discussing the contents, the formats, the epistemology, and key figures bound up in the Kan narrative, this article provides insights on its contextual origins and reception as well as the texts that recount it. Rather than a proven historical episode, the narrative was effectively re-constructed by two groups of chronicle writers during the early 1900s in order to promote ideas about ‘treason’ and ‘loyalty’ to the throne. Uncovering the contextual origins and reception of the narrative not only allows us to understand the process whereby a long-held body of local scholarship lying outside the scholarly practice of ‘history’ in the present-day sense was used to shape collective knowledge, but also to see its profound impact on colonial and post-independence collective memory and culture.