From Rice to Shrimp: A Behavior to Reduce Risks and Utilize Social Capital of Farmers in the Mekong Delta 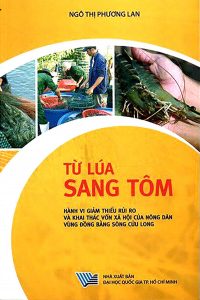 This is an important book on economic anthropology and development economics of Vietnam, which is highly appreciated for scientifically depicting the life of shrimp farmers in the Mekong Delta.

This four-chapter book of Ngo Thi Phuong Lan presents the economic activity of shrimp farming households and the shift in types of farming thanks to the dynamic nature of open economic activity in the Mekong Delta. This is a region where farmers have more diverse and dynamic methods to earn their livelihood compared to the stability of people in the Central and Northern plains of Vietnam. Their ways to make a living shift spontaneously and depend on market factors, with many models being applied, from the rotation of crops and livestock to crop-livestock rotation and vice versa, and so on. The Mekong Delta is a highly dynamic land, where the trend of shifting from low-yield rice farming to commercial shrimp farming at a large scale has become stronger and stronger. Shrimp farming really brings about socioeconomic and ecological changes in the Mekong Delta. Unlike other studies which focus on culture, history or ethnic groups, this can be considered the only study in economic anthropology of farmers in the Mekong Delta.

By studying the typical shrimp farming community in the most diverse agricultural economic picture of Vietnam from the perspective of economic anthropology and social relations, the nature of farmers’ economic behavior, namely the quick adaptation to market production, and the role of social relations in the integration to the world economy, are clarified. In particular, commercial shrimp production is highly risky, so it is necessary to place economic behavior in the interaction with social factors in the shrimp farming community. In addition, the study also focuses on the risk-based approach and social capital approach to clarify new ways of making a living in the historical, socioeconomic and cultural context. Theoretically, the study provides micro-level data that complements the theory of risks and social capital in social science research. It also points out uncertainties for economic activity, the environment and policies for the Mekong Delta in particular and Vietnam in general.

In chapter one, the study identifies rice farming as a traditional and important way for farmers to making a living, while shrimp farming is a relatively new method that did not exist until after 1980. Shrimp farming proves to be highly risky, but also able to help farmers escape poverty and become rich, as well as having a high export value. However, the boom in ponds and areas for shrimp farming has led to high competitiveness, and thus higher risk of the practice. Moreover, the diversity of the market economy does not mean that every farmer can benefit from its liberality, not to mention the adverse impacts on the environment in the Mekong Delta. The shift from rice farming to shrimp farming in the Mekong Delta began in 1980 in Ca Mau. After 1989, the trend was to rotate rice farming and shrimp farming in a year. Later, as the income from shrimp farming grew higher, farmers massively and spontaneously switched to farm shrimp. Households, taking advantage of ecological conditions, cut down forests to have places for shrimp farming, and switched to a rice-shrimp rotation and intensive shrimp farming. The development of shrimp farming areas has left many bad consequences, such as: land mortgages, environmental pollution, biodiversity degradation, and conflicts between freshwater and saltwater areas, as seen in the two farming communities in the study. The selected communities are Ca Mau (saltwater area) and Can Duoc-Long An (freshwater area), whose similarities and differences are surveyed using quantitative methods to sketch out their portraits.

In chapter two, the author presents theoretical issues of risk and social capital and their application in specific research. Conceptual issues are also clarified, focusing on practical research in two residential communities. For example, the study shows that the rich will take risks to improve their lives because they have the capital, while the poor cannot; or people of the middle class will improve faster than the upper class as they are driven by the desire for a better life.  In chapter three, the author clarifies the behavior of reducing risks in economic activity of shrimp farmers in the Mekong Delta. The thought of risk diversification and mitigation is a response to their production characteristics. Products are only supplied to the market and strongly dependent on the market, so they switch from a low-risk environment (rice farming) to a high-risk one (shrimp farming). The study points out that farmers make this choice knowing of the risks, which also depends on policies, land and environment conditions; knowledge and techniques; labor and cooperation in production; production capital; consumption market, costs and income. These factors also create instability, thus it is necessary to diversify and mitigate the risks of shrimp farmers, such as: farming rice and shrimp in parallel to ensure food security for their family; selectively applying scientific knowledge to decide to farm extensively or industrially; selecting high quality breeds and feed. The poor who do not take risks often choose to provide supporting services or be hired to work. This behavior is driven by market demand and profitability, and is based on conditional rationality through risk diversification.

In chapter four, the author clarifies that social relations and social capital play a rather important role in economic activity, and are provided through informal social organizations and networks, such as family, clan and marriage relations; religious organizations and informal loan clubs (a form of capital-raising performed by one person in the club) also have certain influences in shrimp farming. The role of social capital is evident in the support of capital, engineering, labor and market information, which also create options for transforming, minimizing or expanding shrimp farming, etc.

Ngo Thi Phuong Lan has conducted a study of both scientific and practical significance about farmers in the Mekong Delta. The study’s findings are based on surveys and field research conducted in two areas that are more than 200 km away from each other in more than 3 years, which is a remarkable effort. The success of the study is also due to the selection of quantitative and qualitative methods for case study, thus increasing its scientific meaning from the perspective of an economic anthropologist. The author has succeeded in identifying the rationality of farmers in their adaptation and conversion of livelihoods to earn income and minimize risks in shrimp farming. In practice, the study points to the morality of survival and the choice of making a living of farmers in the present context. The support and assistance in production activities not only create a united and harmonious community, but may also lead to potential conflicts of interest. The book is considered a documentary film about the life of farmers in the present context of the Mekong Delta.