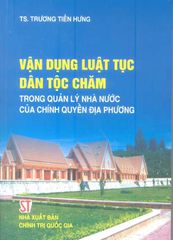 Vietnam is a multi-ethnic country, and the Vietnamese government has realized the existence and importance of the customary laws of ethnic minorities. The government has tried to navigate the official and central laws and the customary laws of each ethnic group to maintain flexibility and efficiency in the legal system. Cham people, with a long history and cherished cultural heritage, also have a robust customary law (adat Cham) which plays a vital role in sustaining and protecting public order and solidarity. In this book, the author addresses an exciting topic: using customary law at the provincial level of government in administrative governance targeting the Cham people in Ninh Thuận province. The author starts with the definition of customary law, its scope and influence in the ethnic groups and its potential usage in the broader legal context and system of the whole country; he identifies the main difference between customary law and traditions, customs with unique legal aspects and the ability to manage various facets of community life. The author also analyses conditions such as natural, cultural, historical, and socio-economic factors in nurturing and enforcing unique characteristics of Cham customary law. Contributions of this local law have been examined, such as the inheritance obligation through the youngest daughter due to matrilineality or a marriage age for girls and boys which is younger than the standard of civil marriage and family law. The author systematically evaluates the effects of Cham customary law in different aspects of the Cham community from marriage and social security to religious and cultural life, as well as land property and environment. He correctly points to the positive and useful role of this law in the administrative work of the provincial government:

“Since customary law contains regulations which were created and have been inherited, respected and obeyed for many generations, it manages social interactions positively, strengthens the self-governing characteristics of the community, then plays an important role in administrative activities of local government.” (p.102)

In practice, the author analyses and suggests the necessity of cooperation of governmental officials, local priests, and intellectuals in order to maximize the usefulness and minimize the contradiction and gaps of customary law in the modern context and in its relationship with the constitution and central legal system. The author also uses data from distributed questionnaires among the Cham people. Although the number of responses is not provided, the index and percentages do help to understand the attitude of Cham people towards this traditional law.

A potential downside of this book is the section that relates to the presence and influence of this law in religious life. The author mentions the vital role of customary law in religious practices and categorizing the Cham people as one of the most essential aspects. Generally, religion is a pinpoint to distinguish groups among the Cham; therefore, understanding the interaction of law and religion is critical. This point is correct and valuable. However, in this part, there are some minor points which may invite debate and criticism: an over-simplified description of Cham religions (p.26) and Hồi giáo [Vietnamese translation for Islam], a wrong calendar for Ramưwan/Ramawân, (pp.26-27), and an incorrect list of religious groups of the Cham in Ninh Thuận. The author only mentions two groups: Cham Balamon and Cham Bani (p.65) while there are at least three groups: the two above-mentioned groups plus Cham Islam (in some sources, Cham Jat is also listed as a fourth group). While the author states that each administrative unit such as a village (palei) usually contains one religious group, the reality is quite different. Many Cham villages in Ninh Thuận such as Phước Nhơn, An Nhơn, Văn Lâm have two groups: Cham Bani and Cham Islam; Phú Nhuận is the home of Cham Bani and Cham Balamon.

In another place, the author mentions the role of complete and fulfilled knowledge of customary law by the provincial officials: “each provincial official cannot and does not need to know all customs and traditions of that ethnic group.” (p.109)

This statement contradicts the author’s opinion elsewhere on the influential role of knowledgeable officials (p.128). I do believe that competent knowledge of customary law and culture of the targeted ethnic group is a fundamental requirement for governmental officials.

Last but not least, it would be better if the author provided more practical and empirical examples in which customary law has been applied to solve problems and settle conflicts. At the same time, he needs to update the new and ever-changing situation of community life, which affects law. For example, prohibitions against intermarriage between different ethnic groups or the same ethnic group with different religions have been loosened, although some challenges remain, such as conversion after marriage or differences in dietary restrictions for the wedding feast.

In brief, this book shows the need for relocating and re-centering customary law in a positive and helpful way by the provincial government. Despite the limitations mentioned above, this book demonstrates an organic relationship between Cham customary law and the broader legal system and suggests further research on Cham legal traditions in particular and on Cham culture in general.