‘Victory of the Aggregate Strength of the Era’: Lê Duẩn, Vietnam and the Three Revolutionary Tidal Waves 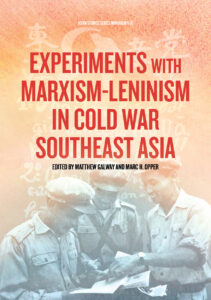 About the chapter: This book chapter explores the origin and evolution of the concept of the ba dòng thác cách mạng (‘three revolutionary tidal waves’) in post-unification Vietnam. Advocated by VCP General Secretary Lê Duẩn during the early years of the Vietnam War until his death in 1986, the ‘three revolutionary tidal waves’ became the cause, direction, legitimacy and ambition of the Vietnamese communists for more than two decades. They believed that (1) the global socialist revolutionary movement, (2) the workers’ movement in capitalist countries and (3) the national liberation movement in the colonized territories (with Vietnam as its vanguard) composed the three ‘tidal waves’ of world revolution. Thanks to the force of history, the party asserted, these high tides rose to create the ‘aggregate strength of the era’ to attack imperialism on all sides. While its original goal was to add global significance and value to Vietnam’s war of resistance against the United States, whereby seeking support for Hanoi’s war efforts both at home and abroad, reunification in 1975 significantly boosted the position and, ultimately, arrogance of Vietnam. This culminated in the VCP’s decision to ‘export’ this concept to socialist fraternal states and countries in the Non- Aligned Movement, as leaders stressed the importance of the third ‘wave’. International events such as the US–China diplomatic normalization, Vietnam’s invasion and occupation of Democratic Kampuchea in 1979, Sino-Vietnamese border war and the collapse of the Eastern Bloc ultimately weakened the role of the first ‘wave’ and highlighted the magnitude of the third ‘wave’. Not only demonstrates that the ‘three revolutionary tidal waves’ is one of the most prominent legacies of Lê Duẩn, this chapter also sheds overdue light on the VCP’s designs to export its revolution globally on completing its initial revolution for independence and reunification.

About the book: One of the most contentious theatres of the global conflict between capitalism and communism was Southeast Asia. From the 1920s until the end of the Cold War, the region was racked by international and internal wars that claimed the lives of millions and fundamentally altered societies in the region for generations. Most of the 11 countries that compose Southeast Asia were host to the development of sizable communist parties that actively (and sometimes violently) contested for political power. These parties were the object of fierce repression by European colonial powers, post-independence governments and the United States. Southeast Asia communist parties were also the object of a great deal of analysis both during and after these conflicts.

This book brings together a host of expert scholars, many of whom are either Southeast Asia–based or from the countries under analysis, to present the most expansive and comprehensive study to date on ideological and practical experiments with Marxism-Leninism in Southeast Asia. The bulk of this edited volume presents the contents of these revolutionary ideologies on their own terms and their transformations in praxis by using primary source materials that are free of the preconceptions and distortions of counterinsurgent narratives. A unifying strength of this work is its focus on using primary sources in the original languages of the insurgents themselves.

About the author: Khue Dieu Do was a HYI New Approaches in Asia-Pacific Historical and Contemporary Studies Training Program Visiting Fellow from 2019-20.