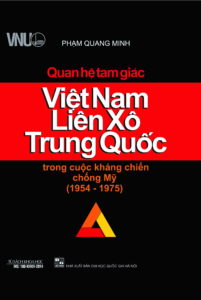 This monograph analyzes the formation, dynamics and complexity of Vietnam-Soviet Union-China triangle relations throughout the two-decade long conflict in Vietnam, which is widely called “the Vietnam War” outside of the country yet also known as the “anti-American resistance war” from within. Written by a Hanoi-based scholar, it presents the generally less-known point of view from the leadership of North Vietnam. Despite structural drawbacks, the book is a valuable contribution to the lively discussion of Hanoi’s interactions with key Socialist allies during one of the longest wars in American history.

The first part (Chapters I and II) introduces the theoretical background of triangular relations in international relations. Based on the case study of U.S.-Soviet Union-China great power relations, the book explains the characteristics and limitations of a strategic triangle relationship, before linking to North Vietnam’s interactions with two of its most important Socialist allies. It then delves into the formation of Vietnam-Soviet Union-China triangle relations amidst complex international and regional context. American involvement and strategies in Vietnam are believed to be the catalyst that connected the three actors of Hanoi, Moscow and Beijing altogether, creating a unique triangular relationship within the Socialist camp.

In the next part (Chapters III-V), the triangle relationship is analyzed according to pairs of bilateral relations, moving from Soviet Union-China relations to Vietnam-China and Vietnam-Soviet Union ones. Whereas the latter pairs are presented in accordance with the three stages of the war (1954-1964; 1965-1973 and 1973-1975), the former focuses primarily on the origins of the Sino-Soviet split.

The final part (Chapter VI-VIII) provides a comprehensive assessment of the effects that the Hanoi-Moscow-Beijing triangle cast on the developments of the conflict in Vietnam. Historical lessons are drawn for Vietnamese decision makers in conducting foreign policy to maximize national interests and balance the country’s relations with the great powers.

Based on Vietnamese archival resources, the book highlights Hanoi’s skillful tactics in using the limitations in both of the above triangle relationships to seek the “scarce loopholes” and maximize its “leverage” (229). By maintaining its “flexible neutrality” (239), North Vietnam survived the escalated China-Soviet Union conflict. Hanoi also took advantage of the two Communist giants’ rigid perceptions of their roles (Moscow as “bastion of Socialism” and Beijing as “center of revolution” – 261; 287) to gain the vital support for its resistance war and reduce the negative effects caused by not only Soviet-American détente but also Sino-American rapprochement.

Nevertheless, by emphasizing Hanoi’s success in manipulating great power triangle relations and the Sino-Soviet split for its own interest, the author falls into what he himself criticizes as “an exaggeration of the role of Third World nations” (21). Another problem is found in the structure of the book, with several misleading chapter subtitles. Part “6.3. War’s Methods” should have been titled “The Kennedy and Johnson Administrations’ Involvement.” Instead of “War’s End” and “Major Factors,” parts 6.5 and 8.1 mainly deal with the Nixon administration’s strategy in Vietnam. Moreover, the extended structure results in many parts of the book becoming repetitive. For example, the second paragraph of page 183 repeats the second paragraph of page 109, and ten pages (278-286) of Chapter VIII repeat the beginning of Chapter VI (147-155). These structural shortcomings, however, can be attributed more to the book’s editors rather than the author himself.