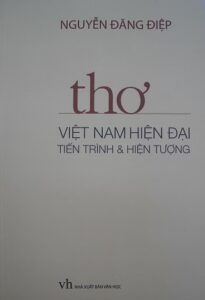 Literary scholarship in Vietnam has long been dominated by Marxist theories which emphasize the importance of sociopolitical elements in the interpretation of literature. The idea of social realism as the most orthodox and righteous way of creating and evaluating artistic works originated from the Soviet Union and China. The conditions of economic and cultural closure during the continuous wars helped maintain the monopoly of Marxist methodology in the field of research and criticism. Only after the era of opening and renovation began in 1986 did literary studies increasingly diversify. With the reception of new perspectives and methods from across the world, Vietnamese scholars have reexamined and reevaluated the history of Vietnamese literature. Vietnamese Modern Poetry: Progress and Phenomena is an example of this trend.

This book is a collection of interrelated essays dealing with the problem of modernization in Vietnamese poetry since the beginning of the 20th century. It consists of two parts. The first part attempts to depict the modernization of Vietnamese poetry as a continuous progression from tradition to modernity, from locality to world community, from simplicity to sophistication. The second part contains a selection of commentaries on notable poets and their works as “phenomena” in the progress of modernization.

In the introductory essay, the author points out the limits of the orthodox periodization of literary history. Such periodization, he argues, subjects the work to politicization. He suggests a new way of tracing the development of poetry based on shifts in artistic paradigms. Specifically, he categorizes the whole history of Vietnamese poetry into three “paradigms”: medieval, modern and postmodern. Each paradigm shift is the result of the integration of Vietnamese poetry to the external world through the process of cultural exchange. The process of modernization began with a major shift from the medieval paradigm to the modern one in the early 20th century due to great cultural changes brought by French colonization. Poetry was renovated by a new conception of writing which emphasized the originality and individuality of poets. Since Vietnam was divided after World War Two, the progression of poetry followed two different directions of redefining the characteristics of the modern paradigm, as influence diverged along Communist and Western lines. Recently, Vietnamese poetry’s postmodern paradigm has emerged as the result of globalization and increasingly strong links to the wider world. The author seems hesitant about claiming that there is now a postmodern movement in Vietnamese poetry due to the lack of social conditions conducive for such a radical literary trend. However, he does see “signs” of a new paradigm in many literary works.

The following essays are not as innovative as the introductory piece but the author also tries to look at familiar literary phenomena from new perspectives. He reads the works of the New Poetry movement (Tho Moi) from the early 20th century through the lens of ecocriticism. Reassessing and categorizing poetry from the war against America in terms of poetics and genre, he argues that wartime poetry was the combination of oral tradition, the New Poetry and Communist ideology. It is an important continuation in the process of literary modernization. With the intent of portraying a panorama of post-war poetry, the author skillfully delineates the trends and characteristics of contemporary Vietnamese poetry. He spends two essays addressing the problem of poetry and readers in the age of globalism and the issue of being “new” as a criterion to evaluate poetry.

This book is an endeavor to diversify the interpretations of Vietnamese modern poetry. It does succeed in many ways. However, it also has shortcomings as the author is not consistent in his goals. He tries to give a new model for understanding the evolution of modern poetry but does not follow it systematically when falling back on the familiar methods of periodization in other essays. The poetry of the wartime South Vietnamese poets is mentioned but not elaborated in detail.  Overseas Vietnamese poetry is completely ignored. The selection of commentaries on the notable poets and works is somewhat arbitrary. Nevertheless, this is a fine book in the current field of literary criticism in Vietnam.