War and Peace: the Korean War and the Birth of the Armistice System 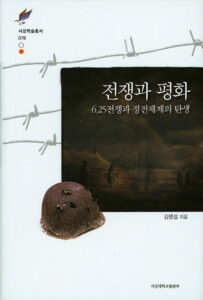 Clausewitz said that war has “its grammar” but not “its logic.” The logic is provided by politics. That is why we see the dialectic of war and peace in reality, instead of the simple incarnations of ‘ideal types,’ either of total annihilation or permanent peace. In this book, Professor Myongsob Kim, advocating for a serious academic dialogue between contemporary history and political science, applies this Clausewitzian wisdom to the Korean War—the first ‘hot war’ in the whole course of the Cold War—with a special focus on the armistice.

The book begins with St. Augustine’s words on the difficulty of ending war and achieving peace: “It is not that they love peace less, but that they love their kind of peace more.” This aphorism represents the main climate of the war. The Korean War was a clash between two completely different political expressions based on mutually antagonistic worldviews, which originated from the global ideological warfare of the early 20th century: international communism versus international anti-communism, ‘Chōsen nationalism’ of North Korea vs. ‘Han’guk nationalism’ of South Korea, which had different international orientations. Therefore, it cannot be reduced simply to an outcome of “a dialectic of revolution and reaction (Bruce Cumings).” The author visualizes the nature of the clash through a symbolic episode: the time at which the war broke out. For Pyongyang, it was 4 AM, for Seoul, it was 5 AM. This discrepancy was caused by daylight-savings time, which Seoul implemented until 1952 under the influence of the United States. Naturally, in order to decide the appointment time, the delegations of the two sides had to ask each other before having the first meeting of the armistice talks: “Our time?” or “Your time?”. Both sides fought at close range on a small peninsula, but the gap between them was deep and fundamental. As “war by other means,” the fluctuating drama of the prolongation of the armistice negotiations, which the author meticulously researched, reflected love for “their kind of peace” rather than just blind love for violence.

Considering that there are many studies about the Korean War in both the fields of Cold War history and international studies, three contributions of the book can be described as follows. First, by tracing the ‘strategic interaction’ during the course of armistice talks between both sides, the book shows the Korean War as a real “duel on a larger scale (Clausewitz).” Because of legitimate methodological reasons, such as the lack of accessibility to Chinese and Russian sources, or some ideological biases, such as assuming the innocence of the ‘national liberation movement,’ some previous studies based on ‘revisionism’ are characterized by a ‘disparity of attention’ which generates a “boxing match in which only one boxer was visible (Walter Laqueur).” The book suggests two struggling camps closer to the image of a “duel.” Second, the book also reveals the nature of the strategic interaction (cf. Jeffrey Herf 1991). It was asymmetric and the two sides were not just two functionally equivalent units in the international arena. By taking seriously the connection among ideology, regime type, and strategic behavior, the author portrays many aspects of the asymmetric interaction between liberal democracy and totalitarianism during the negotiations. In particular, Li Kenong’s masterminding of the communist negotiations shows an effective negotiation strategy based on ideological guidance as well as considerable solidarity on the part of the communist side before the death of Stalin. Third, without losing sight of structural factors, such as the international Cold War or the defining influence of ideas and regimes, the book illustrates and reenacts the “diplomatico-strategic behaviors” (Raymond Aron) of diplomats and soldiers on the firing line. As a result of this macro-micro linkage, the author suggests that the meanings of the Korean War are not divorced from the meanings understood by the participants and still have universal dimensions at the same time.

The book may evoke some ambiguities. In his conclusion, the author argues, as the most significant implication, that the legitimate course for “permanent peace for Korea and Eastern Eurasia” should be made not by recklessly abandoning the armistice system, but by a gradual “transcending” as a part of “aufheben”. This stance on the armistice system can be evaluated as a sober recognition of ‘the necessity and relative progressiveness of the Cold War.’ As Aron said, the Cold War meant a situation: “peace is impossible, war is unlikely.” It was better than simple subordination to totalitarianism. It was far better than hot war. In this respect, the armistice system is better than simple-minded replacement by a chimerical and unripe peace system. However, is this not the maximum level we can expect? If the violent war derived from incompatibility between two regimes, as the author fully explains, was barely sealed by a much more complex system than NATO in Europe, how can we imagine ‘beyond the armistice system?’ The answer may be dependent on the reader’s proactive reading and creative interpretation.