Women’s History in Chosŏn Korea as Viewed through Paintings 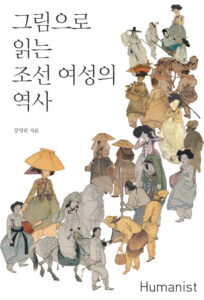 Myŏng-gwan Kang has pioneered the integration of art history with the study of Korean literature. In his new book, Kŭrim ŭro ingnŭn Chosŏn yŏsŏng ŭi yŏksa (Women’s History in Chosŏn Korea as Viewed through Paintings), Kang uses different painting genres – portraits, didactic illustrations, vernacular paintings, and erotic paintings – to explore the multifaceted representations of women in oppressed conditions during the Chosŏn dynasty (1392-1910). This work is best understood within the context of Kang’s previous scholarship. In his earlier scholarship, Kang focused on the literature of Chosŏn Korea’s middle class, or chungin, broadening the scope of his research from textual analysis to study of the cultural space that produced and consumed art, music, and literature. Kang’s interest in folk culture led him to 18th century Korean vernacular painting, or p’ungsokhwa, which depicted scenes from the everyday lives of people of different classes in vivid detail. The results of these investigations appear in his three books on folk culture. Meanwhile, Kang’s 2009 Yŏllyŏ ŭi tʻansaeng(The Birth of the Virtuous Woman) considered how the discourse of female chastity was employed though didactic books such as the Samgang haengsil-to (三綱行實圖, Illustrated Conduct of the Three Bonds) in the oppression of women during the Chosŏn dynasty. Thus, Kang’s new book, Women’s History, is not only an interesting read for a general audience, but also has its roots in his substantial body of previously published research.

A prologue and three chapters illuminate the changing status of women chronologically. To his  “Prologue-Koryŏ,” “I. Early Chosŏn,” and “II. Late Chosŏn”, Kang adds a final chapter, “III. The Insubordinate Female Agent” in order to reveal a different side of women’s history. Women’s social status eroded under the strict patriarchal systems that emerged as Confucianism became the dominant social ideology in Chosŏn Korea. As women in the latter part of dynasty were deprived of the right to inheritance and of opportunities for social participation, their value instead began to derive from their family roles as virtuous wives and wise mothers. Kang revisits this well known history through paintings: the portraits of couples that existed until the Koryŏ dynasty did not continue into the Chosŏn dynasty; scenes of banquets for the elderly depicted women only as old mothers who received filial piety from their descendants; illustrations of exemplary women showed them as virtuous wives who chose death in order to maintain their chastity. Meanwhile, institutional concubinage in the form of the kisaeng – a practice that early Chosŏn reformers attempted to abolish due to its contradictions with Confucian teachings – not only continued but extended to the private sector in late Chosŏn. The dynasty’s sexual exploitation of women is evident in the flourishing beauty paintings and erotic genres. While it is clear that the ruling elites of Chosŏn used double standards to maintain the patriarchy, it is unclear whether women continued to subordinate their desire to that of men. In vernacular and erotic paintings, Kang discovers the multifaceted reality of Chosŏn women, in which they actively supported and practiced religions outside of Confucianism and made use of diverse expressions of their sexual desire.

Kang has opened a new era in studies at the intersection of different fields of humanities. He has provided the social context for paintings that art historians had previously been unable to detail. At the same time, Kang has deployed the methods and findings of art history in understanding the artistic context of paintings – breaking previous scholars who used paintings as supplementary illustrations. Yet some minor questions might clarify his arguments. For example, how much does the painting media reflect reality as opposed to the ideal or fantasy? Who viewed and commissioned these paintings? To what extent were and can we understand women as the producers of art as opposed to the painting subjects? Answering such questions is not the task solely of this book. Rather, one can hope that researchers from diverse fields such as literature, art history, and women’s history will take them up in future collaborative studies.