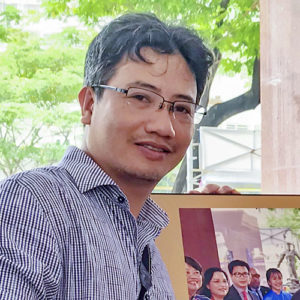 Bui Viet Thanh’s research is focused on examining different aspects of Vietnamese society. As an undergraduate and MA student, he was drawn to sociology. “Society was changing rapidly after 1995, when the U.S. normalized relations with Vietnam. Many companies from all over the world entered Vietnam, which made Vietnamese society change very quickly.” As a student, he participated in urban culture programs, including those focusing on the urban development process during the French colonial period. His experience in these programs led him to study anthropology for his PhD. “I saw that a lot of images were taken in Vietnam by French photographers, and I thought that the images had historical value. Actually, people always said that the true value of the images was for Vietnam to see the past. I was collecting the images and using them for illustration in my research, but I didn’t know the significance of the images until now. Furthermore, I realized that it requires extensive knowledge and training to understand cultural diversity and to understand how cultural issues interact within society. So, I decided to study anthropology to supplement the direction of social and cultural research.”

Bui Viet Thanh wrote his PhD dissertation in cultural anthropology on “Traditional Trade Village in Quang Tri Province: Tradition and Transformation.” He notes that many of the traditional craft villages are present in French historic photos, which ties to his current research project on “A Visual Anthropology of French Photographic Construction of Vietnam’s Central Highlands (1840-1945).” For his current project, he will revisit photos taken by the French of indigenous peoples in the Central Highlands of Vietnam from 1840 to 1945, “rethinking and reassessing the French visual records of these uplanders.” In doing so, he hopes to “suggest new approaches in the photographic visualization of Vietnam’s Central Highlands.” 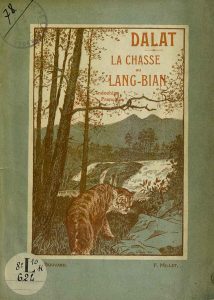 His study will reveal what these photographs can tell us, besides their historical value. “Images of the highlands of Vietnam are always considered valuable documents. However, the message of humanity was erased from the racist view of the French. French photographers took pictures the way they wanted, rather than letting the indigenous peoples of the highlands express their wishes or send messages about their culture and philosophy to the world.” In these photos, the indigenous people were objectified and exoticized. “People in the highlands of Vietnam lost their names, had no voice, passive, and were seen in a conditional way that made them no longer human. Some specific issues about racism against indigenous peoples are through the “signifier” and the “signified”; they did not have the right to express their cultural and historical values ​​to us. Although they were the owners of the land, and had their own cultural values, “we” – the French – completely discarded those values.” 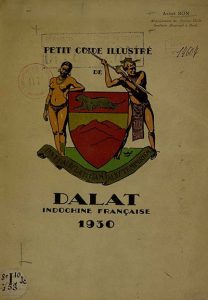 “During my analysis, I learned about the material and social life of traditional society; the traditional social relationship rather than the expression of civilization (from the French point of view) of the indigenous peoples in the highland region of Vietnam. I place the highlands in comparison with African countries that underwent similar experiences during the French colonization period (1840-1945). The colonial ideology can be seen in the subject of the photograph, in the naming, and in the meaning of expression. These were used to justify the process of colonial exploitation in Vietnam.”

“The French colonialists told myths about changing the lives of indigenous people for the better through education, preserving culture, and honoring ethnic beauty. But their images especially bring a message of backwardness and barbarism.” There are still ramifications felt today. “The images bring misleading messages to contemporary Vietnam, where we still call indigenous people by French colonial names. This study, conducted from a decolonizing perspective, is different from the myths that the French built. My research will help remove ethnic stereotypes and return respect to indigenous people. I want to recognize the equality of cultures, their value, and their voices in future research”.

The images used for his study have been collected from newspapers, photobooks, and personal collections. “It has been lucky for me to collect these images for research, of high historical value. The published resources make it clearer to identify French people’s ideology and prejudices in the highlands of Vietnam. These resources help me better understand the essence of the myth, built by the French in the Vietnamese highlands, in a more multi-dimensional way. In particular, the clarification of image sources, photographs and time helps to better understand the racism of the colonial state against indigenous people who are considered “inferior”. 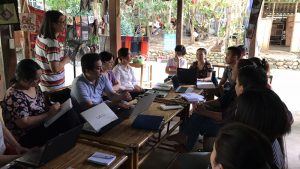 Bui Viet Thanh participated in a HYI training program on “Contemporary challenges to development in upland regions of Vietnam: Impact on ethnic minority peoples” held in July 2019. The program consisted of a series of lectures in Hanoi, followed by fieldwork in Mai Châu, a rural district of Hòa Bình province. “After joining the HYI training program in Hanoi…I realized that a visual anthropology [approach] provides a new analysis of images, finding the hidden messages they contain. It can explain the photographer’s thoughts and the power relations between the photographer and the subject. Here, hidden messages and content are important, not just the historical value of the photo.” By studying and decoding these hidden messages, “I can return the true value for them.”