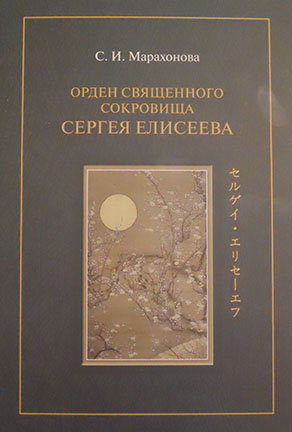 A book entitled Serge Elisseeff’s Order of the Sacred Treasure: How the Son of a Russian Merchant Became the “Father” of American Japanology, by Dr. Svetlana Marakhonova, was published (in Russian) by SINEL, Saint-Petersburg in 2016. Professor Elisseeff taught at Harvard and was the first Director of the Harvard-Yenching Institute (from 1934-1956). The author, Dr. Marakhonova, works at the Institute of Oriental Manuscripts, Russian Academy of Sciences, and conducted research for the book using documents from the Harvard-Yenching Institute archives.

English-language summary of the book:

“This book is the first scientific biography of the outstanding Russian, French and American Japanologist Sergei Grigorievich Eliseev (Serge Elisséeff), a descendent of the Eliseevs dynasty of merchants, well-known in Russia. It is based on archive documents from Russia, Japan, France and US and dialogues with Elisséeff’s relatives from several countries. The book describes his study at the Tokyo Imperial University where he was the first European graduate in 1912. His role in the development of the Russian Japanology and his scientific and pedagogical activities in emigration are shown. In Paris he taught at the School of Oriental Languages and the Practical School of Research. In USA he was the first Director of the Harvard-Yenching Institute and a Professor at the Harvard University. He was called “The Father” of the Far-Eastern studies in the USA. The book describes Elisséeff’s training of the military interpreters and his work as the USA government consultant during World War II. He played an important role in saving Kyoto from American bombing. Previously unknown facts concerning Elisséeff’s colleagues, friends and relatives are presented. The book has many original pictures granted by Elisséeff’s relatives and friends. Attachments contain diaries and letters of the scholar. The book is written for orientalists, historians, culturologists, historians of science and Russian emigration, and a wide range of readers interested in the lives of compatriots who realized themselves out of Russia due to historic circumstances.”