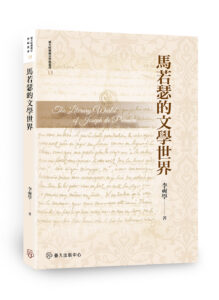 The Harvard-Yenching Institute is pleased to announce that the thirteenth book in the NTU & HYI Academic Book Series has been published. The monograph, entitled 馬若瑟的文學世界 (The Literary World of Joseph de Prémare), is by Sher-shiueh Li  李奭學. The book was published in November 2022. Additional information about the publication is available here.

About the book: Joseph de Prémare was a French Jesuit, who came to Jianxi, China, in the reign of Emperor Kangxi. He was banished to Guangzhou by the next Emperor Yonzheng who had been hostile to Catholicism. Drawing on Cicero’s “Dream of Scipio,” Prémare wrote a story in classical Chinese titled “Dreaming about Paradise” (“Meng Meitu ji”) and in vernacular Chinese he wrote a novella titled Confucianism Befriending the Apostolic Creed (Rujiaoxin). Both texts began the tradition of “missionary novels” in the Qing dynasty. In Guangzhou, Prémare translated eight poems from the Shijing (Classic of Odes), followed immediately by his most famous rendition of The Orphan of Zhao, a play that influenced European theatre greatly in the eighteenth century. Prémare also compiled a book, Notitia linguæ sinicæ, on the grammar and rhetoric of the Chinse language in 1728, wherein he showcased his enormous knowledge of Chinese literature, both classical and vernacular. The present book explores in depth the argument and theme of these five works, elaborating particularly on how Prémare enlisted “Jesuit figurism” to structure them.