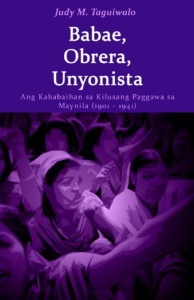 While largely overlooked in Philippine labor history scholarship (and perhaps Philippine history altogether), women have played an important role in shaping the labor movement in the country. Judy M. Taguiwalo’s Babae, Obrera, Unyonista Ang Kababaihan sa Kilusang Paggawa sa Maynila (1901-1941) (2011) (‘Woman, Worker, Unionist: Women in the Manila Labor Movement’) details the role of Filipino women (Filipina, henceforth) in labor groups and their efforts to create better working conditions during the American colonial rule of the Philippines. Through a materialist feminist approach, the book offers a glimpse into social and political factors that influenced women’s entry into the labor force and their attempts to resist intersections of different forms of oppression and marginalization.

The history of Filipina workers during the American colonial period is examined in six chapters. Chapter one sets the historical and economic backdrop of the country as the new American colony and outlines forces that instigated the recruitment of women in manufacturing and agriculture. Taguiwalo notes the socioeconomic inequality that persisted in Philippine society during the Spanish colonization was perpetuated and exacerbated when the country was handed over to the American colonial government. For instance, American investment in industries such as sugar and tobacco benefited American and Spanish capitalists but left Filipinos with subsisted wages. This unequal economic configuration was also upheld by American-established schools, where vocational education equipped students with basic skills that made them ideal for low-skill labor (e.g., production of handicrafts), and access to higher education was limited. These factors and their convergence prompted women to enter the labor force and eventually the labor movement. Chapter two focuses on the adoption of free trade as an economic policy and colonial tool by the American colonial government and its negative effects on Filipina laborers. Free trade policies opened opportunities for the Philippines to export goods (e.g., tobacco, sugar, and hemp) to the US and consequently, a sector of the agricultural and manufacturing industries saw growth. However, these commercial enterprises only required unskilled labor, which kept wages low–a problem that was compounded for female laborers who were paid less than their male counterparts. The third chapter discusses the education system established by the colonial government and the opportunities and constraints that it posed for Filipino women during the period. Taguiwalo argues that while education equipped Filipino women with basic literacy and math skills, this type of education prepared them to contribute to the colonial economy in specific ways (i.e., as unskilled laborers). Moreover, schools continued to instill patriarchal ideals introduced by Spain (e.g., a woman’s role is to be a good housewife and a mother).

Chapter four discusses labor regulations for women and children (e.g., Act No. 3071 which regulated the employment of women and children in shops, factories, and other places of labor).  Such laws that were designed to create better working conditions for women (e.g., giving maternity leave), however, were poorly implemented (e.g., complaints made to the Bureau of Labor about violations of Act No. 3071 generally did not result in any legal repercussions for employers). The fifth chapter outlines the participation of Filipinas in the labor movement during the first (1901-1925) and the second half (1926-1941) of the American colonial rule in the Philippines. Taguiwalo notes that women initially played supporting roles in organizations (e.g., Union Obrera Democratica Filipinas) while a few took on leadership roles such as Narcisa Paguibitan, a labor leader who organized a petition to demand increased wages from the Manila Tobacco Association. Chapter 6 explored the stances of labor groups vis-à-vis women’s issues. Taguiwalo observes that despite women’s active participation in rallying and organizing, factions within the movement, which included women themselves, did not overcome predominant views that women’s roles were as caregivers and housewives, which posed a hindrance for them to taking on leadership roles. The last chapter presents a summary of the findings of the book. Taguiwalo emphasizes that women’s issues were a concern of the labor movement in the country. However, material conditions and sexist ideologies handicapped women from expanding their roles within the movement and despite their economic participation, stereotypical views about women in Philippine society were largely unchanged.

The book contributes to gender studies and the history of labor movements in Southeast Asia. As Taguiwalo makes clear, women’s participation in the labor movement was barely acknowledged and chronicled. By following brief accounts of women’s participation in various documents and publications, Taguiwalo pieces together a narrative of how material forces that were shaped by American colonization created and restricted conditions for Filipinas to participate. Moreover, the book’s materialist feminist orientation to history articulates the agency of Filipina laborers within social and organizational hierarchies that viewed women as secondary to men. That is, while there were constraints, women from the working class at the time were inching towards a more active role in society through attempts at class solidarity. Despite its strengths, Taguiwalo’s materialist approach is at the expense of the role of discourse and discursive practices. While the book lightly touches on religious and literary discourses, a fuller discussion of their influence on working-class women could aid in further understanding the inability of Filipina laborers to imagine themselves beyond the domestic sphere. Nevertheless, the book is invaluable as it is one of the rare accounts of women in Southeast Asian labor movements and colonization’s intersection with gender.